Alan Bradley was a major character in Coronation Street from Ep 2587 - 15 Jan 1986 to Ep 3002 - 8 Dec 1989. He is regarded as one of the most memorable villains in the history of the show and met a grizzly and sudden demise in December 1989 when he was hit by a Blackpool tram when trying to kidnap his on off partner Rita Fairclough. Alan was a regular villain in the show, in a time when villains were very rarely regular characters, unlike in more recent years. He started off quite humble but started to show his darker side when he beat up Terry Duckworth in the Rovers in 1986 for spreading malicious gossip about his daughter Jenny. The rest was history as he became more villainous until his demise under a Blackpool tram in December 1989. Alan was played by Mark Eden.

Alan Bradley was born on the 20th July 1939 to Mr Bradley and Mrs Bradley. Not much is known about his early background. Whether Alan had a tough childhood, thus him turning into a villain in later life is unknown.

He wed Pat in around 1967 and the first 2 or 3 years of their marriage was great. They had a daughter Jenny Bradley in 1971 but this made Pat become more withdrawn. Alan worked all over Britain and spent a lot of time away from home. Pat and Alan later divorced and she died in a car crash in January 1986 and Jenny Bradley was sent to be looked after by a Rita Fairclough in Weatherfield, Salford, Lancashire. Alan was proven to be a con man and a cheat although his daughter's foster guardian in Weatherfield did not know this, and Alan would later bond with Rita.

In January 1986 Alan Bradley turned up in Coronation Street to see Rita Fairclough as she was looking after Alan's teenage daughter Jenny Bradley, who was Rita's papergirl. Jenny started dating Terry Duckworth. He spread nasty rumours about her and Alan's darker side emerged when he thumped Terry 4 times in the Rovers. Alan and Rita begun dating. Alan was never sure Rita loved him so he had an affair with Gloria Todd. In August 1987, Alan planned to marry her and planned a surprise wedding. She was furious when he took her to the registry office.

Rita tried to get Alan involved with The Kabin, Coronation Street. He saw her as a financial burden. In the end he stole the deeds of Number 7 Coronation Street so he could take out a mortgage, and also to pretend to be Rita's deceased husband Len Fairclough. He went to a bank where no one knew who Len was. Alan set up a security firm, with Rita unaware that she was financing it, and he tried to rape his receptionist Dawn Prescott. Dawn told Rita about Alan, as she knew about the source of Alan's funding. Rita found letters addressed to Len in Alan's files. She confronted him but he tried to suffocate her with a cushion. In March 1989, Alan was arrested for assault. He was put in remand. In July 1989, Alan had his 50th birthday behind bars. Diddums.

At his trial in October 1989, he was given 2 years imprisonment but walked free due to time already served. He then took a job on the building site opposite the terraced side of Coronation Street. Baldwin's Casuals, Coronation Street and Community Centre, Coronation Street had been cleared for redevelopment, which was to include a new Kabin newsagents, garage, factory owned by Mike, and houses and salon. The builder behind the project was Maurice Jones, who was around Alan's age.

Alan tormented Rita. Rita could not cope with Alan always around her so she disappeared, not telling anyone where she was going, so no one could trace her, not even best friend Mavis Wilton.

Locals thought he had killed her and buried her body underneath the building site. Police looked for a body but nothing was found.

In late 1989, Alec Gilroy and his wife Bet Gilroy spent an overnight trip in Blackpool. Alec wanted to check out some singing acts. At a hotel owned by an old friend of his, Alec saw a "Rita Littlewood" singing on the stage. They had found her. Rita was in a terrible state and had hid it while on stage. She decided to stay in her Blackpool hotel. Alec felt guilty about accusing Alan of killing Rita so he returned to Weatherfield and told Alan where Rita was.

Armed with the info about Rita, Alan decided to go to Blackpool in early December 1989. Bet followed him, knowing he may harm Rita if he found her. Alan sneaked into the hotel Rita was staying at, and thought Rita was a sleep in the bed but it was Bet who said he should leave Rita alone.

Alan saw Rita and chased after her, he said they are going back to Weatherfield now. He frogmarched her into the car but she escaped and ran across a tram line in front of an oncoming tram. Alan chased her but was not so lucky as the tram whacked into Alan, killing him instantly. Bet Gilroy quickly arrived and comforted a crying Rita, while the dead body of Alan Bradley lay at the side of the tram. Alan's reign of terror was over. This meant Rita could return to a normal life.

Jenny had to identify the body. Jenny blamed people for Alan's death, especially Rita. Alan was buried at the Weatherfield Cemetery on the 15th December 1989.

The dark memory of Alan Bradley still held over Rita for years, and she ended up selling her and Len's house to escape from it. Alan's daughter Jenny remained in the street until two-years after his death, with a brief return in 1993 to get money out of Rita. Jenny wanted Rita to lend her £30'000 so she could open up a business. Jenny felt she was entitled to the money as Rita had profited from her relationship with Jenny's father. Rita realised Jenny was just after her money, so she gave Jenny a cheque for £1000 and told her to leave Weatherfield. Jenny obliged.

In December 2010, exactly 21 years after Alan's death, a tram crashed into Coronation Street after it derailed off the viaduct. Rita was almost killed when the Kabin was damaged. As she lay with minor injuries in the rubble she said "What is it with me and trams?".

In 2013 when Rita was about to talk about Alan Bradley, she was clearly upset and decided to order a drink before elaborating further.

In 2015, Jenny returned to Weatherfield after 22 years away. Rita was shocked but soon put any past grievances with her almost step daughter behind her.

In 2016, Jenny Bradley went to Blackpool to visit where her dad had died, to try and "Lay that ghost to rest". History nearly repeated itself when Jenny saved Jack Webster from being struck by a tram, just narrowly being hit herself. Jack almost joined Alan on the list of Weatherfield Residents Hit By Blackpool Trams.

In 2017, Alan's daughter Jenny married Johnny Connor. Of course Alan had long since died by then so was not able to give his new son in law a ticking off, telling him to "look after her or get his legs broken". This makes Alan Bradly the posthumous step grandfather of Carla Connor, Aidan Connor and Kate Connor.

Builder Pat Phelan who lived in the street from 2016 to 2018 was a modern day version of Alan Bradley, a conniving man who will do anyone over to get what he wants.

In 2021, Sharon Gaskell remarked on how Jenny was Alan's daughter.

Nothing much is known about Alan Bradley's early background, whether he had any siblings, and very little is his childhood. In 2018, Jenny mentioned an aunty Frances, but she could have been a maternal aunty. Wikipedia mentions Jenny's other relatives as "Richard Bradley". 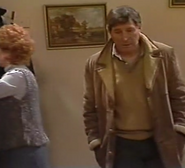 Alan Bradley meets his demise. His death by tram is instant, like Nescafe. 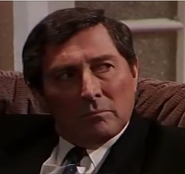 Alan in 1989.
Community content is available under CC-BY-SA unless otherwise noted.
Advertisement