Alan Patrick Howard was born on the 23rd April 1924 in Newcastle. He was one of 4 children. Alan later met and married Laura Dennet and they had one son, Mark Howard in 1952.

Alan Howard made Elsie Tanner the manageress of his salon. They soon start dating. In the end, Alan left the area after Elsie says she does not want to marry again. Alan returns to Weatherfield in July 1970, and pleads with Elsie to take him back, telling her he is ready to commit. Elsie forgives Alan and the pair marry a couple of weeks later.

Elsie returned to Weatherfield alone in April 1976, stating that her and Alan are on a trial separation. The following year, he embarked on an affair with an employee named Elaine Dennett. Elaine visited Elsie in Weatherfield asking her to divorce Alan so Elaine can marry him. Elsie visited Alan in Newcastle in 1977, but shortly afterwards received a letter from him asking for a divorce as he intended to remarry. Despite Elsie not wanting to, the divorce went ahead in 1978. It is unknown if Alan went ahead and remarried afterwards as he said. 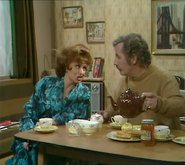 Alan and Elsie in 1973.
Community content is available under CC-BY-SA unless otherwise noted.
Advertisement