Doris Speed
Annie Walker was a character in Coronation Street from the first episode, Episode 1 (9 Dec 1960), to Ep 2351 - 12 Oct 1983. She was the landlady of the  Rovers Return and often acted like the Duchess of Weatherfield. Her beloved husband Jack Walker ran the pub with her until his death in 1970. Annie got help from her eldest child, son Billy Walker until he left for Jersey in 1975, and a year later, Annie hired live in potman Fred Gee. Annie left Weatherfield in 1983 to stay with her daughter Joan Davies and never returned to Weatherfield. Annie was played by actress Doris Speed.

Anne Beaumont was born on the 11th August 1909 in Clitheroe, Lancashire. She was the only child of Edward Beaumont and Florence Beaumont (Nee Scatterwood). Annie used to often speak of her distant French ancestry as the Beaumont's came over from France during the Norman Conquest. Annie also mentioned some Scottish roots.

Annie Walker had been running the Rovers Return with her husband Jack for 30 years by 1960. Annie had a tendency to look down on people she saw as below her, despite the fact that she was running a back street working class pub. She still regarded herself as The Duchess Of Weatherfield due to her notable family background.

Billy Walker returned to Weatherfield permanently in 1970 upon Jack's death and stayed with his mother on the premises. Annie had Bet Lynch and Betty Turpin as barmaids.

In May 1975, Billy returned to Jersey to run a business down there. Annie Walker was now 66 years old. She found it hard running the pub with just 2 barmaids who did not live on the premises. She had no cellar man, so relied on the dray men to take the crates of beer and spirits up and down the cellar, as well as enlist help from Bet and Betty, and occasionally the regulars such as Stan Ogden, Ray Langton and Albert Tatlock, offering a free drink in return. And as her husband Jack had died 5 years earlier, Annie was alone in the pub after closing hours so was vulnerable.

One time in November 1975, 2 youths, Les Grimes and Neil Foxall hid downstairs in the gents toilets until after closing. Once the pub had shut for the night, they hunted around, and went into her bedroom and demanded money off her. A light was seen by Albert Tatlock as being still on downstairs, and a noise was heard, and Albert told Len Fairclough and Ray Langton. At first they assumed Billy had come back for a visit but agreed to have a look. As they walked through the back gate, they came across Les and Neil running out so Len and Ray tackled the robbers and a massive fight ensued in the back yard of the pub. The 2 robbers then fled into the night. Len got a black eye after the fight. It soon became clear that Annie was vulnerable, running the pub by herself.

In March 1976 Albert Tatlock and Stan Ogden went down to the cellar but were accidentally locked in. They spent the night there, helping themselves to the barrels of beer. Annie was annoyed to see them in the cellar the following morning. She barred Stan and Albert. Annie was told she needed someone to live with her on the premises, so Fred Gee was taken on as the pub cellarman. He stayed in the spare room upstairs. He was a live in potman. Annie felt safe now having a man live with her. Also Fred was a big bloke and quite fiery so could easily handle any trouble. Annie later allowed Albert and Stan back into the pub.

Annie celebrated 40 years as landlady in October 1977. Billy was the guest at the party. In 1978, Annie was tended to by a man who claimed to be a consultant, but he was just a porter. In April 1979, Alf Roberts laid into Annie when she snootily suggested that Reenie stock better stock. Alf had temporary PTSD from the lorry crash the previous months.

By the early 1980s, Annie was slowing down a bit. In May 1983, Annie allowed Bet, Betty and Fred to have time off to go to Tatton Park but the car rolled into the lake and they were all late back. Annie defended Brian Tilsley, as Fred took the car before the repairs were completed. In October 1983, Annie attended a Bring and Buy Sale, and briefly met new Rovers regular customer Percy Sugden.

In January 1984, Annie took an extended break and stayed with her daughter Joan in Derby. In February 1984, Annie phoned the Rovers to say that Betty was to be in charge. Fred Gee was not pleased so went straight to the brewery (as was his usual answer to every conflict with workmates and bosses) and asked for the managers job. George Newton gave him the job. Fred started to throw his weight around a bit but had to go to hospital for food poisoning. Annie got her son Billy to return in March 1984. In July 1984, 74-year old Annie decided to retire completely and left her son Billy in charge as the new landlord.

Billy planned big changes to the pub, and planned to keep the Walker dynasty going. He did not want to keep Fred Gee on, and Fred claimed that he had worked for the past 8 years for Billy's mother, and feels he is owed something. Billy reminded Fred that Annie has retired and he is in charge now. Fred wanted compensation, and Billy knew Fred had a case. Billy goaded Fred into smacking him so he could sack him, and Billy was successful. Betty defended Fred saying Annie would not have got rid of him, but Billy said Annie needed him as a cellarman. Billy liked to cut corners, unlike his perfectionist mother. Due to cutting corners, Billy was challenged about this by the brewery, and left the Rovers in December 1984 and returned to Jersey, this time for good. Sometime during 1984, Annie has secretly bequeathed the Rovers tenancy to long term barmaid and hot pot supremo Betty Turpin. However Betty never took up the bequest and her colleague and friend Bet Lynch became the landlady.

Annie lived a happy retirement. However her children Billy Walker and Joan Davies (Nee Walker) never had any children themselves so Annie had no grandchildren, at least not before 1985, whether Billy has fathered a child or children since his final departure from Weatherfield in late 1984 is unknown.

A picture of Annie would remain in the back room of the Rovers for many years when Bet ran it, somewhat still keeping her presence there despite her departure. It was eventually removed by the 1990s.

One time, Betty described her former boss Annie as "That old crow".

It is unknown exactly when Annie passed away, although it was by 2012 as in March Emily saw a flat screen TV in the pub and said "Annie Walker would be turning in her grave". This is a given as by this point Annie would be 102. At the same time, Betty died and it was revealed that Annie had bequeathed the Rovers to Betty in 1984. Annie never owned the pub so she may have bequeathed the tenancy to her. However the brewery would have had the final word on this, so Betty's bequest was invalid. Annie was mentioned in 2012 to Leanne Battersby who said she never heard of her. Leanne had arrived 14 years after Annie left the street. 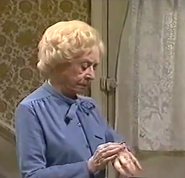 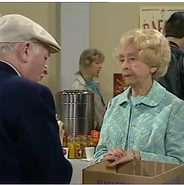 Annie's will, dated 1984.
Community content is available under CC-BY-SA unless otherwise noted.
Advertisement