Betty Driver
Betty Williams (formerly Turpin nee Preston) was a character in Coronation Street from 1969 to 2011. She was a long term barmaid and hotpot cook at the Rovers Return. During her 42 years at the Rovers she became good friends with fellow employee later landlady Bet Gilroy. Betty died offscreen in 2012 due to the death of Betty Driver, the actress who played Betty. It was then revealed that Annie Walker had secretly bequeathed the tenancy of the pub to Betty back in 1984, although Betty probably never knew about this bequest, or she kept it strictly to herself. Hotpot maker, more like Hotpot Landlady.

Betty arrived in Coronation Street in June 1969 in order to help out her sister Maggie at the corner shop. Betty eventually began working at the Rovers Return, where she would remain for forty years (on & off). Betty had a love/hate working relationship with her snooty boss Annie Walker.

1974 was a busy year for Betty, as Betty became widowed in 1974 after her retired policeman husband Cyril died. Also later that year, a birth certificate was found by Megan Hopkins, known as Granny. The birth certificate was Gordon Clegg's, and as Granny Hopkins knew Gordon, she deduced it was his birth certificate, and she knew that Maggie Clegg (now Cooke, as she had recently remarried) was not his real mother. Granny wanted to find out who this Elizabeth Preston was. She was told that Maggie and Betty were Preston's before they got married, and as Betty is a pet name for Elizabeth, Granny knew Betty was Gordon's real mother. Betty was worried that she would be blackmailed, as Gordon did not know about his true parentage. In the end, Megan told Gordon, and the Hopkins family had to do a moonlight flit in early 1975, and Gordon accepted Betty as his mother.

In 1975, Betty thought the Rovers was haunted by the ghost of Martha Longhurst who had died 11 years earlier. Betty had never met Martha as Martha had died 5 years prior to Betty arriving in the Rovers. It was hinted that Betty had heard about Martha, however she gave a very detailed description of her, which Ena confirmed was just how Martha was. It was never 100% explained if it was Martha's ghost or not.

In 1982, Betty was mugged. Betty vowed to carry on working and would stick to main streets from now on and not go down back alleys. In 1984, Annie Walker retired and left Betty in charge, much to the annoyance of Fred Gee. Annie also left a will in 1984, bequeathing the tenancy to Betty, but Betty never took up the bequest. In early 1985, after nasty Billy Walker was forced out by the brewery, Bet Lynch became the landlady and kept her good friend Betty on. Secretly, Betty was the landlady, if you go by Annie Walker's will. In June 1986, the Rovers burnt down but reopened. Betty found Alec Gilroy was pompous. Betty was sacked in 1992 over a hotpot dispute but was soon reinstated.

In 1995, at 75 years of age, she remarried, this time to her wartime sweetheart Billy Williams, however unfortunately he passed away two years later in 1997. Betty built up a reputation as the best and most famous hotpot maker of the area. In 1999, Betty celebrated 30 years working at the Rovers, not counting the many times she has walked out and returned though.

In 2002, Betty decided to retire from the Rovers and sell up her house, in order to live with her son Gordon and his wife Caroline in London. However Betty found it lonely as the pair of them worked most of the time and her grandson Peter was at school. She felt even more unwanted when Caroline began looking for nursing homes to move Betty to, prompting Betty to return to Weatherfield and get her house back. Betty returned to the Rovers.

In early 2012 Betty began to fall ill, so took time off work. She passed away in April 2012 around the time Gordon came to visit her. A devastated Gordon revealed the news to her friends at the Rovers. A retcon revelation was that way back in 1984, Annie had bequeathed the Rovers to Betty in her will. Betty had kept this quiet all these years. It seems Betty never took out the bequest, or the brewery had the final say and the bequest was invalid. 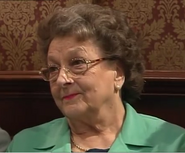 Betty in 2002.
Community content is available under CC-BY-SA unless otherwise noted.
Advertisement