Jack Watson
Bill Gregory was a character in Coronation Street on a recurring basis from 1961 to Ep 2375 - 4 Jan 1984. He was the on off lover of Elsie Tanner. Bill was played by Jack Watson.

William Gregory was born in about 1920. He joined the army and was a friend of Len Fairclough. In 1949, Bill left the army and then married Phyllis.

Bill Gregory arrived in Weatherfield in September 1961 to see his friend Len Fairclough and started to date Elsie Tanner. He did not say he was married. In 1962, when Phyllis arrived, Bill decided to leave with her.

In February 1970, Bill's wife had died by then and he wanted Elsie to help him run a wine bar in Portugal but she said she was in love with Alan Howard. Bill returned to Portugal alone. This was his last visit to Weatherfield for over 13 years.

In December 1983, Bill heard his friend Len had died earlier that year so he paid another visit. He met up with Elsie again and he asked her to return to Portugal. Elsie said her roots are in Weatherfield. In the end, while chatting to her friends Bet Lynch and Betty Turpin about opportunities, she suddenly decided to join Bill, and said she was crazy for doing so but will join him. She arranged for her daughter Linda Cheveski to organise the sale of No 11 Coronation Street.

By mid January 1984, Bill and Elsie were settled in Portugal. They retired and lived the life of luxury in the sun. They married that year. 20 years later in 2004, Bill and Elsie died in a car crash. She was 81 and he was about 85. Dennis mentioned their deaths to Rita Sullivan upon his return to Weatherfield in 2011. 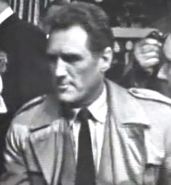 Bill with Elsie in Blackpool.

Bill reconciles with Phyllis before leaving the street in 1962. 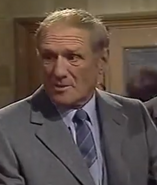 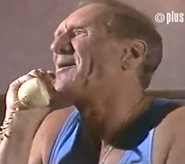