Sean Ward
Callum Logan was a character in Coronation Street who appeared from October 2014 to September 2015. He was the ex boyfriend of Kylie Platt, and father of their son Max. Callum was an evil drug dealer whose ego and nastiness knew no bounds. In the end he was koshed on the head by Kylie when he was attacking Sarah Louise Platt. After his death, several of his old cronies gave David Platt hell.

Callum was played by Sean Ward.

Callum Logan was born in 1987. He was the son of a teacher, Marion Logan, and her husband Mr. Logan, who was probably of Irish heritage. They lived on The Ecclestone Estate, (odd for a teacher to live on a council estate). Callum was an only child. As he grew up Callum became friends with Macca and Gemma Winter, and Kylie Turner. The 4 of them went around causing trouble and taking drugs. In late 2005 to early 2006 Callum started a relationship with nineteen-year old Kylie, also from the same estate, which resulted in her being pregnant. Although he had nothing to do with her during the pregnancy, he did turn up at the hospital for the birth and took in her and their newborn son Max. Callum was supportive towards Kylie and the child, however ended up in trouble and got himself locked up for attacking a judge. Kylie lost contact with Callum, and wouldn't know his living situation for many years to come. She left the estate and bettered herself.

In August 2014, Kylie spoke of Callum to her husband David Platt around the time Max was diagnosed with ADHD.

Feeling stressed with family life Kylie returned to her old haunt - The Dog & Gun - and met Callum again after eight-years. She wanted to score drugs off him. Callum later tried to get Kylie back saying her life living in a posh semi would be boring. On Christmas Day 2014, Callum turned up at the Platts with a bike for Max. David came in and was told Callum was Max's real father. Callum and David got into a fight and this started off a feud between the two. David tried to report Callum to the police for possession of drugs.

More to be added.

In May 2016 - eight months after his murder, Tyrone Dobbs crashed his pickup truck into Gail's annex when avoiding Carla Connor's vehicle. This caused the floor to be destroyed, thus exposing Callum's corpse much to David's panic. The next morning the body was discovered by police. Although yet to be identified by a morgue, the police knew it was Callum as his credit card was on the body and the Platts were later arrested, although later released pending further investigation. During David's police interview he put Jason's name forward as a possible suspect, citing that he may have buried Callum's corpse when working on the annex. Jason was arrested for questioning, but later released. Jason's late father Tony Stewart was ruled as the killer, as he was the one who worked on the Platts annex around the time of Callum's death and he had previous problems with Callum due to Callum beating up Jason and putting him in hospital.

In September 2020, a sinkhole opened up in the Platt's garden. It was organised by Ray Crosby and a mate. It is suspected Ray has a connection to Callum. 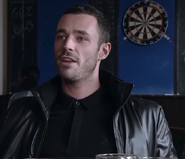