Kevin Kennedy
Norman "Curly" Watts was a character in Coronation Street from Ep 2324 - 11 Jul 1983 to Ep 5572/5573 - 1 Sep 2003. He was originally a binman alongside Eddie Yeats but later went on to become manager of Freshco's Supermarket. He was great friends with fellow Coronation Street residents Terry Duckworth and Kevin Webster. Curly was played by actor Kevin Kennedy.

Norman Watts was born on the 4th July 1963 in Weatherfield to Arthur Watts and Eunice Watts who were older parents. In about 1976, he got a job as a paper boy and briefly knew Rita Fairclough who ran The Kabin, Rosamund Street, which is where the shop was situated back then. Curly later got a job as a binman.

In July 1983, 20 year old Curly was a binman alongside Eddie Yeats and Chalkie Whiteley. The 3 of them were good friends. Eddie left for Bury in late 1983. Curly started to develop feelings for Sharon Gaskell in December 1983. One time Elsie Tanner passed Curly and said hello to him but he was too lovestruck to say hello back. Curly became friends with Terry Duckworth and Kevin Webster. Towards the late 1980s Curly broke away from being a binman and went into retail. This gave Curly a chance to move on in life.

In 1989 Curly's new boss was Reg Holdsworth at Bettabuys Supermarket. Curly lodged with Jack Duckworth. One time, Curly dated Kim Taylor, who worked at Bettabuys. Curly later became a manager at Bettabuys and occasionally that went to his head. Kim even drenched him with a pint due to this. In 1993, Curly caught neighbour Vera Duckworth stealing but she said she did not know she was stealing. Curly let her off.

Curly had a string of failed relationships. He had a "will they wont they" thing with Angie Freeman. He later entered into a relationship with Raquel Wolstenhulme but vied with Des Barnes for her affection. Curly and Raquel married in 1995, after she realised Des was only after casual sex. Curly and Raquel's marriage was short lived. In 1996 she emigrated to Kuala Lumpur, pregnant with their child, born in July 1997, Alice Watts. At the time, Curly did not know he was a father. In November 1999, Curly was the team leader of a Freshco's Competition in the Peak District. He became quite a dictator, and when Fred Elliott hurt his foot, Curly suggested they leave him overnight on the cold, dark moors and send someone back to help him. Fred's son Ashley Peacock took a dim view of this.

Curly later dated Emma Taylor, a policewoman. They had a son Ben Watts in 2001. Curly and Emma decided to leave Weatherfield in September 2003 when Emma got a job transfer to Newcastle. Curly bade a farewell to Coronation Street after 20 years. 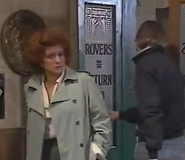 Curly Watts walks out of the Rovers as Elsie walks in. 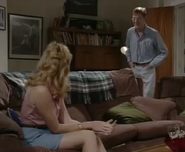 Curly leaves the street in 2003
Community content is available under CC-BY-SA unless otherwise noted.
Advertisement