Deirdre Barlow (formerly Langton and Rachid, nee Hunt) was a character in Coronation Street who first appeared in Ep 1236 - 20 Nov 1972. She was first married to Ray Langton then Ken Barlow and again to Samir Rachid and then to Ken again. Deirdre was known as "Sexy Specs". Deirdre last appeared in Ep 8486 - 8 Oct 2014. Deirdre was played by actress Anne Kirkbride until shortly before her death in January 2015. The character was killed off in July that year.

Deirdre Hunt was born on the 8th July 1955 in Weatherfield. She was the daughter of Donald Hunt and Blanche Hunt (Nee Linfield). Deirdre was their only child. In 1963, Donald died after being hit by car. Blanche bought Deirdre up alone. One time at school, Deirdre clashed with Eileen Pendlebury.

In the 1970s Deirdre began working as a secretary for Ray Langton and Len Fairclough at their builder's yard. She began dating publican Billy Walker, although Billy's mother Annie didn't approve. In 1974 Deirdre put up with bullying by a spiteful Ray, although this stopped when her mother Blanche slapped Ray in the pub and warned him not to upset her daughter again. In 1975 Deirdre and Billy decided to suddenly call off their wedding, and surprisingly she began to start going out with Ray after Billy's departure. Her and Ray married that year, and in 1977 their daughter Tracy was born.

But the marriage soon started going downhill when Ray started an affair with Janice Stubbs, which Deirdre found out. She remained with Ray and they planned to move to Holland for a new life, but on leaving day she had cold feet and decided to remain behind in Weatherfield with Tracy, as she couldn't trust Ray after his infidelity. Following her separation from Ray Deirdre moved in with Emily Bishop, who became a good friend of hers and very supportive.

Deirdre began seeing Ken Barlow and in 1981 they married. But a year into the marriage Deirdre got bored due to Ken being older and not interested in having much fun, plus he wasn't interested in having any children with her. Deirdre found herself attracted to local businessman Mike Baldwin and the pair had an affair. In 1983 Deirdre planned to leave Ken for Mike, but got cold feet and called it off. Mike came to the door confused and Ken, who was now aware of what was going on, shouted at Mike and slammed the door, and strangled Deirdre in a fit of rage. Following the incident the pair reconciled, although the incident kickstarted Ken's feud with Mike Baldwin for many years to come.

Ken later adopted Tracy when Ray gave his approval. But in 1989 Ken began an affair with Wendy Crozier, which Deirdre found out and caused her to throw Ken out of the house. Their marriage ended and the couple ended up divorcing. Despite leaving off on bad terms, the pair began to show interest in each other as the years passed and Deirdre missed Ken. In December 1993 she left Weatherfield to look after her mother, and returned a few months later only to find that Ken was with Denise Osbourne and got her pregnant. This angered Deirdre as she had wanted kids with Ken but he only refused, only to now get another woman pregnant. Ken tried to make things work with Denise following the birth of their son Daniel, but the relationship didn't work out and Denise ended up leaving in 1997.

Deirdre met Samir Rachid on holiday and the pair married. Most of the residents didn't approve, feeling it was only done to give Samir a VISA to live in the United Kingdom, although the pair loved each other. When Tracy's kidney packed in after taking drugs at a nightclub, Samir offered to give a kidney of his as he was a match. He was beaten up on the way to the clinic by a gang of racists, and later died in hospital. His kidney was salvaged and given to Tracy which saved her life, but a grief stricken Deirdre wanted nothing to do with Tracy. Eventually though mother and daughter reconciled.

In 1997 she fell for Jon Lindsay, who claimed to be an airline pilot. He was revealed as a conman, although he stitched Deirdre up and she got 18 months in prison while Jon worked free. Ken and Mike teamed up to help Deirdre and later exposed Jon's true nature, which secured Deirdre a release and Jon's own imprisonment. During her time in prison she made friends with Jackie Dobbs, who protected Deirdre against a sadistic warden.

In 1999 Deirdre and Ken reunited and she moved back in with him. Blanche returned to Weatherfield to stay for good, and moved in with the couple and began living in their front room. Deirdre's eye began to wander in 2001 when she slept with Dev, although she instantly regretted it and remained with Ken. Tracy returned to the family on Christmas Day 2002 after leaving her husband Robert Preston, who she claimed had an affair. But when Robert turned up it turned out Tracy had an affair with his friend. He asked her to return, but Tracy refused and stayed in Coronation Street for good. Tracy was shown to have developed a nasty streak. Tracy began a relationship with Dev in which she learned Deirdre slept with him. When Ken had a hearing for assaulting pupil from hell Aidan, Tracy revealed to Ken Deirdre's infidelity. Although Ken was upset, he forgave Deirdre and remained with her.

In 2005 Ken proposed to Deirdre and she happily accepted. They planned to remarry but it was interrupted with the return of Ray Langton, who was revealed to be dying of stomach cancer. Although Deirdre and Tracy found it hard to forgive Ray, they later took pity on him and forgave him. Deirdre married Ken for the second time, although Ray passed away during the reception.

In 2007 Tracy was arrested and charged with killing her boyfriend Charlie Stubbs. Deirdre believed that Tracy had committed the murder in self-defense, as she believed Tracy had been abused by Charlie for weeks (although this was set up by Tracy). Before her trial Tracy confessed to her mother that she had actually killed Charlie in cold blood and he never hurt her. Deirdre was sickened at her daughter, although chose to stand by her regardless. Tracy was found guilty of the crime and sentenced to 15 years.

The incident again tested Deirdre and Ken's marriage, and Ken moved out of the household to see Denise and Daniel again while Deirdre remained behind in No.1 with Blanche. Despite it looking like another end to their marriage the pair of them reunited and embraced.

In 2009 Ken began an affair behind Deirdre's back with actress Martha Fraser, which lasted for a few months. Ken planned to leave Deirdre in May 2009 but couldn't find himself to go ahead with it so stayed behind. He showed Deirdre a letter he left for her about what he was planning to do. Deirdre was upset but chose to forgive Ken and didn't want to discuss the matter. However it would come up a couple of times, as Deirdre used the affair to make a jab at Ken.

In 2013 Ken left to look after his grandson Adam in Canada, and Deirdre remained in Weatherfield in which she looked out for the Barlow family. In 2014 when Peter was charged with killing his lover Tina McIntyre Deirdre stood by Peter, although didn't inform Ken as she didn't want to worry him. Ken returned in August 2014 after being away for over a year, and was angry at Deirdre for not telling him his son was in prison for murder. They made up following this.

In October 2014 Deirdre got stressed out due to the family falling apart and Peter's incoming trial and ended up having a breakdown at the dinner table, in which she threw a trifle against the wall. Later on Ken calmed Deirdre down and convinced her to go to the Lake District and visit her friend Bev Unwin for a while. Deirdre accepted the offer and gave Bev a ring.

Deirdre spent nine months in the Lake District. She planned to return sooner but was embarrassed when discovering Tracy had an affair with Liz's boyfriend Tony Stewart. Deirdre was going to return in July 2015 in time for her 60th birthday, but she suddenly passed away. Bev returned to Coronation Street to break the news to Ken and Tracy.

After her death Deirdre continued to be mentioned by family, friends and neighbours. Shortly after her death Ken became friendly with Audrey Roberts and had clear attraction to her, although nothing came about it. He began going out with a woman named Nessa, although his family felt it was too soon. Ken ended up feeling the same and realising he still misses Deirdre, he split up with Nessa.

Tracy went to visit Deirdre's grave on the first anniversary on her death after she (once again) alienated a lot of people after it turned out she had been blackmailing Carla Connor for months. Robert Preston and Amy Barlow went to the graveside to support Tracy.

In 2017 Adam Barlow took Amy to visit Deirdre's grave, even though it meant missing an urgent appointment with a drug dealer which could endanger him.

In March 2017 Ken spoke of Deirdre to Sinead and admitted that even though he loved Deirdre and misses her, he still regrets marrying her as it meant being stuck on the street. This was pertaining to Sinead being with his son Daniel Osbourne, whom he felt was holding Daniel back from studying at Oxford and making a decent future for himself. 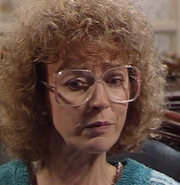 "Oh Tracy. How could you?" to villainous daughter Tracy when hearing of her latest antics.

"He has not been the same since her with the hair hit him on the head with a hooverpipe" Deirdre, talking about Tyrone.