View source
watch 01:36
We're Getting Mutants in the MCU - The Loop
Do you like this video?
Play Sound

Patricia Phoenix
Elsie Tanner (Nee Grimshaw, later Howard) was a character in Coronation Street, initially from Episode 1 (9 Dec 1960) to Ep 1327 - 3 Oct 1973. She returned in Ep 1588 - 5 Apr 1976 but left for good in Ep 2375 - 4 Jan 1984. She was one of the most iconic characters in the shows history. Elsie was quite fierce but vulnerable underneath. Elsie was the mother of Linda Cheveski and Dennis Tanner. Elsie was played by actress Pat Phoenix.

Elsie Grimshaw was born on the 5th March 1923 in a tenement block in Gas Street, Weatherfield. She was the daughter of Arthur Grimshaw and Alice Grimshaw. 9 more siblings followed over the next 13 years, including a sister Fay Grimshaw in 1924.

In 1939 aged just 16, Elsie married Arnold Tanner. She was pregnant at the time. Their first child Linda Tanner was born in January 1940. Arnold and Elsie had a son Dennis Tanner in April 1942. This means that Elsie was a married woman and a mother twice over by her 20th birthday in March 1943. Elsie and Arnold had a rocky marriage and lived in Coronation Street at Number 11 Coronation Street. Elsie sold frocks for a living. Elsie had a habit of being a bit of a man eater and had an eye for the men.

Elsie was 37 years old in December 1960. She accused Dennis of stealing from her. Elsie was quite unlucky in love and her marriage to Arnold was virtually over. Elsie flirted on and off with Len Fairclough. In 1961 Elsie accused arch enemy Ena Sharples of sending her an anonymous poison pen letter. Ena said she would have signed it if she had sent it. Elsie had a fling with Bill Gregory in the early 1960s. Elsie and Ena often argued "Lay 1 finger on me Mrs Sharples and you won't be needing that hairnet. You'll have no flamin' hair left". In 1967, Elsie married American soldier Steve Tanner. By chance, they had the same surname.

In 1970 Elsie married Alan Howard. In October 1973 she moved with him to Newcastle.

Elsie Tanner returned to Weatherfield again in April 1976 and intended to stick around. She took in lodgers Gail Potter and Suzie Birchall. Elsie worked for Mike Baldwin at his factory and became a supervisor. In 1980, Elsie fell asleep and left a cigarette on her sofa, which started smouldering. Stan Ogden and Ken Barlow saved her. Elsie was involved in a few love triangles, including one where the wife of the man she was dating

arrived in Coronation Street and ransacked her house in 1981. The man Elsie spent the night with was Bill Fielding. His wife had heard Elsie was a tart. Elsie turned 60 in March 1983. In June 1983, she banished Suzie Birchall from Weatherfield for spreading malicious rumours about Gail and Brian.

In January 1984, Elsie was paid a visit by her old flame Bill Gregory. It was quite sudden. He suggested that she come to Portugal with him. She "ummed and arred", saying she liked Weatherfield. After some more persuasion, Elsie finally relented and agreed to go to Portugal with him. She packed a few things and contacted her daughter Linda Cheveski to sort out the bills until Elsie sells the house. That dark night on the 4th January 1984, Elsie ordered a taxi to pick her up outside The Rovers Return to take her to the station for a train to London to meet Bill. Just after the taxi arrived she had one last look around Coronation Street and reminisced about her many arguments with Ena Sharples. Elsie posted a note through the Barlow's letterbox to say she was heading off for pastures new. The taxi driver asked how long she was going away for. Elsie said "Ah now there's a question". Elsie got into the taxi and the taxi drove off into the night, as Elsie again left Weatherfield, this time forever.

Elsie Tanner cut all ties with Weatherfield once she went to Portugal with Bill Gregory in January 1984. Her daughter Linda Cheveski returned to Weatherfield and sold No 11 to Bill Webster. Elsie died in 1987 and Linda returned to Weatherfield briefly to reminisce with Emily Bishop and Mike Baldwin about Elsie and her past exploits on the street. Unknown to them, Elsie mysteriously resurrected and continued running the bar with Bill Gregory. Dennis Tanner was aware of his mother's rebirth, although it is unknown if Linda knew.

Elsie continued living in Portgugal until 2004 when she died a second time after being involved in a car accident with Bill Gregory, with him also perishing. She was 81 years old at the time of death, and never came back again. Dennis found out about his mother's death, and informed Rita Sullivan upon his return to Coronation Street in 2011.

The style of Elsie Tanner lived on in characters such as Bet Lynch, Denise Osbourne and Carla Connor, all of whom had Elsie's ferocity but were always vulnerable underneath. Denise even looked like Elsie.

In 2004 Vera referenced Elsie when she noted that Jack smelled like "Elsie Tanner on VA Day" when catching a scent of perfume of him. This was the same year that Elsie and Bill Gregory died.

In 2011 it was revealed that Eileen Grimshaw and her sons Todd Grimshaw and Jason Grimshaw were distant cousins to Elsie. Dennis Tanner mentioned that his mother Elsie Tanner's maiden name was Grimshaw. It turned out that Eileen's father Colin Grimshaw and Elsie were first cousins due to their fathers being brothers. In 2017, Eileen married villainous Pat Phelan, meaning the nasty builder is a distant marriage relative of the late Elsie Tanner.

In 2017 Rita (who had been diagnosed with a brain tumour) mentioned to Gemma Winter about people from her past who are now gone, with Elsie being one of them. The tumour was benign and not life threatening.

Elsie teaches her son Dennis a bit of discipline.

Elsie returns to the street in 1976 after 3 years away. 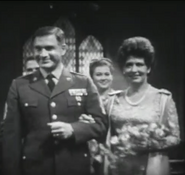 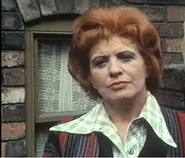 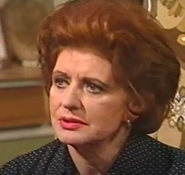 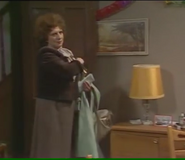 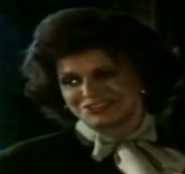 Elsie speaking her last ever line in the show as she leaves Weatherfield forever.

Debbie Rush as Elsie Tanner for the Text Santa appeal in 2015
Community content is available under CC-BY-SA unless otherwise noted.
Advertisement