Ernest Gordon Bishop (on occasions, he was known as Ernie) was a character in Coronation Street from Ep 702 - 6 Sep 1967 to Ep 1773 - 11 Jan 1978. He was the husband of Emily Bishop and was a keen photographer. He worked as a wages clerk at Baldwin's Casuals, Coronation Street. He was shot dead by Ed Jackson in a bungled wages snatch in 1978, leaving Emily devastated. Ernie was played by actor Stephen Hancock.

Ernest Gordon Bishop was born on 11th August 1930 to George and Caroline Bishop. Ernest had a sister called Edie who would later marry Sidney Burgess. Ernest took up photography. He was known by his trade name Gordon for a time.

Ernie Bishop arrived in 1967 to take photos at the wedding of Elsie Tanner to American Steve Tanner. He started dating Emily Nugent in 1969 at his mum's funeral. Ernie was a photographer. In 1972 he married Emily. Ernie did turn on friend Stan Ogden when he was accused of being a peeping tom. The real culprit was caught.

In 1976, new factory boss Mike Baldwin offered Ernie a job as wages clerk. In January 1978, Ernie and Mike were being followed in their car by 2 young lads who worked at Mike's factory. When Ernie was sorting out the wages, the said 2 lads, Dave Lester and Ed Jackson (Tommo) walked in, brandishing a gun. They asked Ernie to hand them the bag of money. Baldwin walked in to see how Ernie was doing and accidentally nudged Tommo's arm. The gun went off and Ernie was shot in the chest. Dave and Tommo quickly fled, and Ernie, still alive but badly hurt, was rushed to hospital. The police were called and Mike gave descriptions of the 2 lads. Emily fainted when Elsie Tanner told her that Ernest has been badly hurt. Ernie later died on the operating table when the surgeons were trying to remove the bullet. A surgeon, Mr Liston, had to break the bad news to Emily. He said in the end, there was nothing they could do.

Emily was left distraught by Ernie's death, and told Mavis that she wished she had children with him, as that would have given her a reason to go on. Ernie's killers Dave and Tommo were arrested a few days after the shooting, and were charged with Ernie's murder, and they were remanded in custody. Emily grieved for Ernie, and his funeral took place on the 18th January, soon after Emily identified his body. Emily went to stay with her sister for a time, to grieve. In early February 1978, Emily returned to Weatherfield. Her friends and neighbours started offering her help. Emily told best friend Mavis Bishop that she felt her neighbours were doing too much for her and she wanted to return to a normal life now, and the last thing she wanted was for people to run round after her. Emily then said she has to accept that Ernest is dead, and that she was returning to work tomorrow, at the hospital where Ernest died. Emily tried her best to get on with her life. Ernie's killers were given life sentences (15 years) in March 1978. Dave and Tommo were told they would be out in about 8 or 9 years so were released circa 1986/1987.

Emily soon had to come to terms with Ernie's death. She made sure his memory was preserved. In 1980, 2 years after Ernie died, she found love again and "married" Arnold Swain but he turned out to be a bigamist so she retained the surname Bishop. Emily did not mention the 10th anniversary of Ernie's death in January 1988 to her friends or neighbours, so probably remembered him in private.

In March 1997, 19 years after Ernie died, she heard a gunshot in one of the houses in Coronation Street during a siege where Gerry Turner held the McDonald family hostage. It reminded her of when Ernie was shot. Emily recollected how she turned up at the scene after hearing the news of his shooting, and Hilda Ogden saying "This is the wife".

In 2006, 28 years after Ernie died, his killer Tommo sneaked his way back into her life by attending church with her, not telling her who he really is. He later said he was Ernie's killer. Emily later forgave Ed Jackson. She gave him Ernie's old camera and told him she never wanted to see him again face to face, but to send her a photo ever year to show he was alive.

In 2009, 31 years after Ernie's death, Emily accidentally showed her friend Ramsay Clegg a photo slide of her and Ernie. She spoke about her late husband to Ramsay, a man who she began to fall for. Unfortunately for Emily, Ramsay died of a brain tumour in August 2009, only three months after they first met.

Emily often mentioned Ernie to her friends and neighbours. Emily left for Peru in January 2016 then onwards to Scotland. Her neighbours and niece by marriage Freda Burgess keeps an eye on her house in Coronation Street.

A photo of Ernie and Emily was seen on the sideboard of the living room at No 3 until 2019 when Emily, while living away from the street, decided to sell the house, and new resident Ed Bailey renovated the house totally. 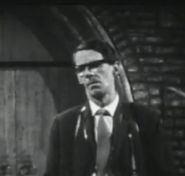