Frank Pemberton
Frank Barlow was a character in Coronation Street from the first episode, Episode 1 (9 Dec 1960), to Ep 361 - 27 May 1964, and again in a guest appearance in Ep 652 - 15 Mar 1967, and one last time in 1971, last appearing in Ep 1049 - 3 Feb 1971. He was the father of Ken Barlow and David Barlow and husband of Ida Barlow. He is the grandfather of Peter Barlow, Susan Barlow, Daniel Osbourne, and Lawrence Cunningham and Tracy Barlow. Frank was played by Frank Pemberton.

Francis Barlow as born on the 19th October 1913 to Sidney Barlow and Edna Barlow. He had an older sister Marjorie Barlow. Frank grew up in Weatherfield. Frank joined the Navy then worked as a postmaster. In May 1938, Frank married Ida Leathers. In October 1939, they had a son Kenneth Barlow. Another son David Barlow was born in July 1942.

Frank Barlow was 47 in 1960. In September 1961, Ida was killed and Frank and Ken warred over it after her death. In February 1962, Frank and Len Fairclough almost came to blows over Frank's son Ken writing an article in the newspapers shunning his working class roots. Ken and Len fought later on. Frank later dated young widow Christine Hardman and they were due to get married. Neighbours were shocked, as Christine was the same age as Frank's son Ken. They both decided to call it a day when the age difference was too much, and he felt more for her than she did for him. Christine later left the area. Frank then opened up a DIY shop.

In 1964, Frank won some money on the pools and decided to leave the dingy Coronation Street for Wilmslow, Cheshire. He seemed to have a slight personality change after winning his money. At his leaving do in May 1964, his neighbour Martha Longhurst died of a heart attack. Frank left the area in late May 1964 without saying goodbye to Ken.

Frank did not return to see his grandchildren Peter Barlow and Susan Barlow who were born in April 1965, but did return in March 1967 briefly to help persuade Ken to pay a £5 fine or go to jail for a week, and being involved in a student demo. Ken chose the latter. Frank then returned to Wilmslow.

In February 1971 Frank made one last visit to Weatherfield for the funeral of his daughter in law Valerie Barlow. Valerie had died after being electrocuted. Frank did not seem to be in the best of health and his voice was slower. Before the actual service, Billy Walker asked Frank how Bramhall was. Frank said it was nice.

Frank returned to Cheshire after Val's funeral in February 1971 and died inbetween then and April 1975.

Frank was said to be dead by 21st April 1975 but the exact date of death was never revealed. Ken and his son Peter were talking about Frank, and Peter asked if grandad Frank was still alive and Ken said "No".

In December 1990, when Ken was depressed over his marriage problems, he looked at old family photos, which included Frank. Ken considered suicide but was talked out of it by Bet Gilroy.

In June 2020, Ken mentioned his father Frank. As of October 2020 Frank is still alive and age 107, although he has no contact with Ken anymore. Ken assumes his father to be dead. Frank is living in a care home in Wilmslow.

In September 2021, Frank, now aged almost 108, probably wept at remembering the 60th anniversary of Ida's tragic death. On 19th October 2021, Frank had his 108th birthday. Frank must watch the news a lot and is bewildered at how Coronation Street seems to feature so much with its sinkholes, tram crash, fires, explosions and serial killers. Yet he never bothers to contact ken to tell him to move away from the world's most dangerous street. 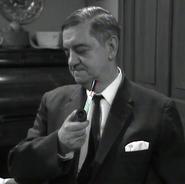