John Harold Duckworth was born on the 7th November 1936, the youngest child of Harold Duckworth and Maggie Duckworth. A brother Clifford Duckworth was born in about 1933. The family lived in Weatherfield. In 1957 Jack met Vera Burton and they married on the 15th August 1957 when Jack was almost 21 and Vera was 19. In around August 1963, Vera had a brief affair, around the time she fell pregnant. Jack saw him off by beating him up, as he knew about the affair. They had one child, Terence Edgar Duckworth on the 4th June 1964. Even though Vera strayed with another man around the time Terry was conceived, Jack was sure Terry was his child though as when Terry grew older, he was so much like his dad. Jack was a taxi driver and had a roving eye for the ladies. He was also a verbal punchbag for Vera. She nagged him constantly. Jack could also be workshy.

In November 1979, Jack Duckworth attended the wedding of Brian Tilsley and Gail Potter, as he was the husband of their friend Vera. Jack started to make The Rovers Return, Coronation Street his local, as Vera worked in the factory opposite. Jack became good friends with Rovers potman Fred Gee. Jack also drunk with Stan Ogden, who was workshy like Jack was, and who was also a verbal punchbag from his wife Hilda Ogden. In 1983, Jack joined a dating agency as American Vince St. Clair. Vera found out and she attacked him with her handbag in front of all the laughing customers.

In 1983, Jack and Vera and their son Terry moved into Number 9 Coronation Street. Jack was as workshy and as lazy as his neighbour Stan Ogden. This annoyed Vera and Terry as they grafted while Jack just sat around betting, and going down the pub drinking. Jack used to do some dodgy deals with Fred Gee such as selling shirts. While Fred's boss Mike Baldwin was away on business, Fred, under duress from Jack, paraded as Mike, the owner of the factory. Mike later found out and sacked Fred in November 1984. Fred snarled at jack. Fred left the area completely and lost contact with Jack and other Coronation Street residents. Fred may have felt Jack lost him his job by getting him into the shirt selling scheme, and then asking him to impersonate Mike, so upon his sacking, Fred ditched his friendship with Jack. Jack was henpecked by Vera into taking over Stan Ogden's old window cleaning round, seeing as Stan had died recently. Jack first met Dulcie Froggatt through the window cleaning round.

In 1985, Jack found out that Terry had got new neighbour Andrea Clayton pregnant. Jack told Andrea's father Harry Clayton that Terry may not be the father, as he must not be the only man she slept with. This earned Jack a whack in the face from Harry as Harry did not like Jack insinuating she was a slut. Jack got a job as potman at the Rovers Return, taking over from Wilf Starkey.

In June 1986 Jack was foolishly responsible for starting the Rovers fire when he installed the wrong fuse in the cellar. The switch flickered and let off sparks before igniting. The fire took a while to spread as it was contained in the cellar to begin with. Bet was rescued when Sally saw smoke billowing from the pub. Bet let the matter drop as she said she should have hired a proper electrician, and not get her potman to do it. In early 1987, Jack was punched in the face by Ralph Froggatt, Dulcie's husband. That year, Jack was cleaning out the chimney and soot fell down. Jack's boss Bet married Alec Gilroy and Alec was also the owner of the Rovers.

In 1992, Jack and Vera became grandparents again when Tommy Duckworth was born to Terry and Lisa Duckworth. When Lisa tragically died (the driver resembled Ashley from Emmerdale), Terry sold baby Tommy to his maternal grandparents Jeff Horton and Doreen Horton. Jack thumped Terry in the face and Terry left the area. In July 1994, Jack accused Vera of cheating on her with Lester Fontayne. Vera denied this, and says she has forgiven him for his flings over the years, so they were even. In late 1994, Jack's brother Clifford turned up. He later died in a car crash in June 1995, and left Jack and Vera £30'000 in his will.

In 1995, Bet Gilroy gave up the Rovers due to money worries and Jack and Vera were interested, seeing as they had come into money recently. They then became owners of The Rovers. However as Jack had a minor conviction, Vera's name was above the door. Jack was miffed. In February 1997, Jack and Vera became grandparents again when baby Brad Armstrong was born, after a fling their son Terry had with Tricia Armstrong, whose nasty husband Carl Armstrong once attacked Jack. Later on, Alec Gilroy bought into the Rovers as Jack and Vera were struggling. Alec planned to eek them out of the pub altogether. In 1998, Alec conned them out of the pub, then sold to Natalie Barnes and left the area. Jack and Vera were just employees again. Jack had a health scare in 1999.

In 2000, Vera was in hospital, and rumours spread that she had died, this was untrue. Jack and Vera later took in Tyrone Dobbs. Jack saw Tyrone as the son he never had, more so than his real son Terry who was a waster.

In January 2008, Jack was widowed after Vera passed away suddenly in her chair, dampening their plans to move to Blackpool together.

Over a year later Jack met a woman named Connie Rathbone who loved pigeons also. The pair struck up a close friendship, although Tyrone became jealous and believed Jack was moving on from Vera too soon. But Jack had no interest in pursuing another relationship and put Tyrone's mind at rest. In September 2009, Jack felt he was getting in the way of Tyrone and Molly's marriage and took up Connie's offer to move in with her, moving on from No.9 after 26 years. However he continued to make some visits, such as for the Christmas period and in early 2010 when Molly and Tyrone were involved in a car accident.

Tyrone decided to name the son of him and Molly Jack, although he was unaware that the child was actually that of his best friend Kevin Webster as a result in an affair between him and Molly.

That year, Jack was diagnosed with non-Hodgkin lymphoma and given only a few weeks to live. He suddenly returned to No.9 without explaining why, and it was up to Connie to return and convince to tell them the truth of the matter. Tyrone was understandable devastated, but Jack stated he wanted to make his final weeks count. Tyrone decided to throw a surprise party at the Rovers for Jack's birthday.

Jack overheard a conversation between Molly and Kevin which revealed that Kevin was the biological father of baby Jack. During his party in the Rovers Jack spoke to Molly over the incident, and she assured Jack that she loved Tyrone. He told her that her and Tyrone should leave Weatherfield together as it was the only way to really put behind the affair.

Jack slipped out from the party and returned to No.9. He slumped in his chair and began drifting away, telling Vera that he was tired. In Jack's final moments, Vera appeared, telling Jack to come with her and that their bus would be leaving soon. The pair of them shared a kiss and a dance, before Jack passed away.

All of Jack's friends and family were devastated to hear of Jack's death. At Jack's funeral, Tyrone made a speech, saying how Jack and Vera married in 1957.

Jack gets cosy with Dulcie Froggatt in July 1986. 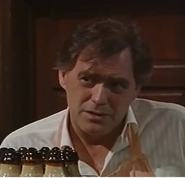 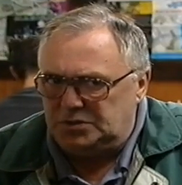 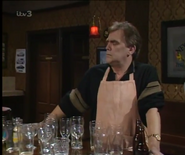 Jack in February 1988, not happy with his temporary boss Betty Turpin. 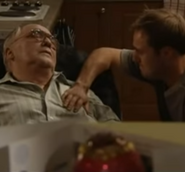