The character returned in August 2008 after a 42-year absence where he got into a feud with local villain Tony Gordon. After a four-episode stint the character appeared further from November 2008 to February 2009, last appearing in Ep 7004 - 2 Feb 2009.

He was played by Kenneth Cope.

John Edward Stone was born on the 6th March 1940 in Liverpool. He was the son of a man nicknamed "Spider" Stone, and his wife. John had at least one sibling, a brother called Ronnie Stone. John was nicknamed Jed, a combination of his first initial and the first 2 letters of his middle name, Edward. Jed turned to petty crime as he got older.

Jed visits Coronation Street in April 1961 in order to convince a recently released Dennis Tanner to go on a "job" with him, however Dennis refuses and Jed leaves after being introduced to a copper boyfriend of Dennis' mother Elsie.

A few months later Jed returns in September 1961 and claims he is a changed man. He begins dating Jean Stark and his friendship with Dennis is intact, and the pair of them along with their respective girlfriends go on a street trip to Blackpool. Jed and Jean break up and she then leaves the Weatherfield area.

Jed briefly visited Coronation Street in April 1962 and tried to look for Dennis at No.11 but discovered that he was in London at the time, so left a letter. He spooked Martha by claiming Jack the Ripper's grandson is hiding out in No.9 before departing the street again. He returns seven months later and hopes Dennis would put him up, but Elsie refuses. A

sympathetic Jed was taken in by Minnie Caldwell and the pair got along, with Jed referring to Minnie as "Ma" and Minnie thinking of Jed as the son she never had. However her best friend Ena Sharples didn't approve, who saw Jed as a troublemaker. After spending a few months in Weatherfield, Jed left for his native Liverpool to stay with some friends, however didn't tell Minnie as he was unable to face breaking her heart.

Three years later in January 1966, he made a surprise return and moved back in with Minnie. He conjured up some more get-quick-rich schemes, but this got him in trouble with the law and he was arrested. The officer arrested him allowed Jed to say goodbye to Minnie at the Rovers (Jed didn't tell Minnie he was going to prison, although she knew deep down) and the pair of them left. This would be the final time Jed and Minnie would meet. Jed was sentenced to nine months in prison for having possession of stolen blankets and sentenced in October 1966. Minnie kept Jed's room ready for him for his release, although he contacted Minnie and asked her to sell his stuff and for her to keep the money.

Presumably released in early 1967, Jed didn't return to Coronation Street and moved back to Liverpool, where he went into a double glazing business with a Pakistani plumber. In 1969 the authorities attempted to get hold of Jed when Minnie went missing, however couldn't track him down (she would later turn up safe and sound). This indicates that Jed had left Weatherfield.

Jed moved to Birmingham, before eventually settling down back in Weatherfield and moving to Nightingale Terrace at some point at the start of the 1970s. Jed had committed another unknown offence at some point around 1974, and was sent to Walton Jail. He shared a cell with Eddie Yeats and would discuss his time on Coronation Street and how kind his former landlady Minnie was. When Eddie was paroled in December 1974 Jed sent him to stay with Minnie for the Christmas period as Jed himself was unable to get released. All this prevented Minnie from meeting her Sonny Jim again, she still welcomed Eddie into her home.

Jed was released at some point afterwards and returned to his address at Nightingate Terrace. He never returned to Coronation Street, and in 1976 Minnie left Weatherfield for good to stay with her friend Handel Gartside in Whaley Bridge. Jed never married or had children, and as he got older he would start to suffer health problems, although he never let it get him down. In the 2000s he bought a cat and called him Sonny Jim after the nickname Minnie gave him.

In August 2008, 68 year old Jed was the sole remaining resident at Nightingale Terrace after landlord Tony Gordon managed to successfully evict the other residents in order to demolish the place to build new flats. However due to living there for 40-years, Jed refused to budge and turned down Tony's money offers. On one incident during the confrontation, Jed collapsed with a stroke and was taken to hospital. Tony had him evicted and threw his cat Sunny Jim out on the street. Tony visits Jed in hospital and relays the news that his house has been cleared out and boarded up and threatens him if he protests further.

Three-months later Jed reunites with former neighbour Emily Bishop (formerly Nugent) who is volunteering at the hospital. Jed reveals that he was evicted from his house and a sympathetic Emily offers Jed to temporarily move into her house back on Coronation Street until he finds a place of his own, which Jed accepts. Jed moves into No.3 much to the displeasure of Emily's lodger Norris Cole, whom Jed enjoys winding up. Jed visited the grave of Minnie Caldwell.

Jed is interested when he hears Tony runs the factory Underworld across the road and several residents dislike him. He hears that Maria Connor was recently widowed after her husband Liam was ran over and killed on Tony's stag night. When she begins to accuse Tony of being behind it, Jed believes her and meets up with Maria telling her how Tony was threatening towards him and nearly left him to die. Jed keeps bothering Tony and demanding payment for his silence, which Tony complies to keep him quiet. When searching for his cat, Jed spots Tony meeting with his henchman Jimmy Dockerson and makes his presence known to the two men. Later that evening, Jed meets Tony at the back of the Rovers and successfully manages to extort more money out of him.

On Christmas Eve a tipsy Jed turns up at the factory where Tony is alone preparing a party. When Jed threatens to go to the police over his knowledge, an angry Tony strangles Jed in the heat of the moment, and presumably kills him. Tony panics and stuffs Jed's body into a hamper. Returning the next morning, Tony finds Jed still alive. Tony ties up Jed and gives him a proposition, he will send him to one of his flats in Wigan where Jed can live rent free and will be given a few grand to set him up, or the other option is Tony finishes the job. Jed agrees, and Tony takes him away after retrieving Jed's stuff from Emily's.

A month later Tony is accused by Maria of killing Jed, which leads to Tony "confirming" her allegations. But he retrieves Jed who is very much alive, showing everyone Tony isn't a killer and making Maria look mad. Jed went to meet Emily and got back his cat Sunny Jim whom Emily and Norris found, and after a drink in the pub was hurried away by Tony and put into a taxi bound for Wigan. An altercation between the pair is witnessed by Tony's wife Carla, who realises her husband isn't all he seems.

Carla tracked down Jed to Wigan in order to get some answers, although the old man was visibly uneasy about the whole thing. When taking him out to dinner, Jed unknowingly revealed his strangulation marks to Carla, confirming to her that Tony was up to something and not quite right. Jed made a quick departure in fear, telling Carla to leave him alone. Three days after the incident, an angry Tony dispatched Jimmy to put the frighteners on Jed, leaving him shaken. Later that evening Emily received news that Jed had a heart attack, and Carla and Tony overheard the conversation between her and Rita. Tony didn't appear phased by the incident, causing concern for Carla about who her husband truly is.

It isn't known what became of Jed afterwards, however he was never seen back in Coronation Street again. His disappearance from the area was never explained. But due to his lack of enthusiasm beforehand in not wanting to stick around the street for long, and even admitting to Tony that he just wanted a new roof over his head, Jed's disappearance could just be down to him wanting to move on from the incident and live out the remainder of his life in his new flat.

Jed is strangled by Tony on Christmas Eve (2008)

Jimmy puts the frighteners on Jed (final appearance of the character) 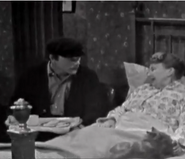 Jed and Minnie in May 1966.
Community content is available under CC-BY-SA unless otherwise noted.
Advertisement