Sally Ann Matthews
Jenny Connor (nee Bradley) is a character in Coronation Street who first appeared in Ep 2584 - 6 Jan 1986. She was the feisty daughter of the memorable villain Alan Bradley. Jenny had a good relationship with Alan's partner Rita Fairclough until Rita found that Jenny was only after her money. In Ep 3604 - 8 Oct 1993, Jenny was given a £1000 cheque from Rita and told to leave town. 22 years later in Ep 8579 - 18 Feb 2015, Jenny returned. She has occasionally shown traits of her late father. Jenny is now the proud landlady of The Rovers Return, Coronation Street. She has the touch of Bet Lynch to her.

Jenny Bradley was born on the 4th March 1971 the only child of Alan Bradley and Pat Bradley.

Young Jenny Bradley came to stay with Rita in January 1986, as she was her new foster daughter. Jenny's dad Alan came to see her and a bond developed between him and Rita. Jenny became friends with Martin Platt and he almost killed her in a car crash in December 1986.

In October 1993 one night at Rita's flat, her and Jenny were having a meal and they started chatting but the subject got back to Jenny's late father Alan. Jenny accused Rita of profiting from his death and it became clear to Rita that Jenny was only after her money. Rita said that she will not get a penny when she dies. Rita decided to write Jenny out a cheque for £1000, saying that is all she will ever get out of her. She told Jenny that she is off to bed now and for Jenny to be gone by morning. That night, Jenny quietly left the flat and left Weatherfield. She cut all ties with her old neighbourhood.

Jenny later moved to Middleton where she married a man named Mr Midgeley and in 2008 she gave birth to their son Tom. But in 2013 Tom died in a paddling pool a month before his fifth birthday.

Over twenty-two years later after leaving Coronation Street, Jenny made contact with former friend Kevin Webster on a dating website in March 2015 and they met at a pub. He was pleased to see her again and they caught up after such a long absence. Jenny later went for a drink with Kevin to the Rovers Return, although she was nervous due to leaving on a sour note with Rita. Jenny was still traumatised from the death of her son and later kidnapped Jake Webster, son of her boyfriend Kevin. Jenny was later sectioned.

Jenny was released from hospital and sent to live at a run-down accommodation. She made contact with Rita via Facebook and the pair met up. When Rita learned of Jenny's terrible conditions, she took her home to stay with her. The Websters weren't pleased, however Kevin accepted her being on the street even though Sally and Sophie didn't. Jenny got a job as a cleaner at Underworld, and began to grow close to the manager Johnny Connor. Johnny's children Aidan Connor and Kate Connor thought Jenny was just after his money.

In September 2017, Jenny and Johnny married. When Johnny got sick of Aidan's antics, he decided not to bother reopening Underworld and instead plan to move to Spain with Jenny and retire. In May 2018, Aidan committed suicide and this lead to tension between Jenny and Johnny. He accused her of wishing Aidan dead. She clumsily poured coffee over his suit and he called her a liability.

In October 2021 Johnny drowned in a sinkhole, leaving Jenny a widow. She is now the sole proud landlady of The Rovers Return. 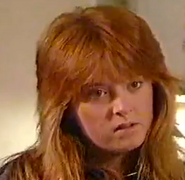 Jenny as a teenager. 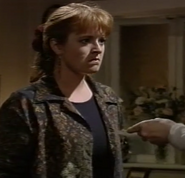 Rita sends Jenny packing with a £1000 cheque telling her to be gone by morning as she is only after all her money. 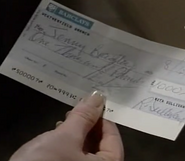 Jenny is left with £1000 instead of £30'000 and is told to be gone from Rita's flat by morning.
Community content is available under CC-BY-SA unless otherwise noted.
Advertisement