Kylie Platt (nee Turner) was a character in Coronation Street who first appeared in Ep 7410 - 26 Aug 2010. She was the feisty half sister of Becky McDonald and the wife of David Platt. Kylie was played by actress Paula Lane.

Kylie died in July 2016 when she was stabbed by Clayton when trying to defend her friend Gemma. She passed away in David's arms in the middle of the street. She last appeared in Ep 8949 (20 Jul 2016) as a corpse in her coffin.

Kylie Turner was born on the 22nd August 1987 to Brian Turner and Miss Granger. Kylie's mum was high on drugs when she gave birth to Kylie. Kylie and her older half sister Becky Granger grew up on The Ecclestone Estate, a council estate. According to Kylie, she was born on the actual estate as her mother was too wasted to make it to hospital. Their local pub was The Dog And Gun. Kylie became friends with Macca and Gemma Winter. They used to take drugs and cause trouble. Kylie was also friends with Shona Ramsey. While on the estate, Kylie met Callum Logan, a local thug, and they had a son Max in 2006. Kylie and Callum later split. This would result in Kylie leaving the estate and bettering herself.

Kyle Turner arrived in Weatherfield in August 2010 to see her older half sister Becky. Kyle wanted money. Becky and Steve gave her some. Kylie started to date local resident David Platt and moved into Coronation Street at the Platt house, which was a nice modern middle class house on the "posh" side of Coronation Street and a far cry from the grim estate she grew up on. Kylie was known to be cunning and manipulative. She married David in 2011, against the opposition of David's mother Gail who attempted to pay Kylie off into leaving.

At Christmas 2012, after several arguments with David she had a one night stand with his brother Nick which they both deeply regretted. In 2013 she discovered she was pregnant, but was unsure whether Nick or David was the father. David overheard a conversation between Kylie and Gail which gave away the truth but he decided to say nothing and quietly plot his revenge against Nick. After Kylie gave birth to Lily, David did a DNA test which proved he was indeed the father. Kylie and David split over David's vendetta which left Nick hospitalised with brain damage, but eventually reconciled. In March 2014, Kylie accosted robber Michael Rodwell but he quickly drove away. Michael and Gail later bonded, Gail being Kylie's mother in law.

In September 2015, Kylie saved Sarah Lou from being killed by Callum, this meant her whacking Callum over the head with a table leg. Her, David and Sarah buried him under the annexe.

After the Callum business was over and Tony Stewart was believed to be responsible for the death, Kylie became concerned for Max's welfare as he was haunted by what had happened. She came up with a plan to leave with David and the kids for a new life in Barbados and be with her sister Becky. David was eventually swayed and Gail was convinced about the idea and asked Kylie to buy champagne from the Rovers so the pair can celebrate. After Kylie bought the drink, she phoned David (who was just down the street) but decided to go and deal with an altercation outside the Kebab shop where her friend Gemma was being harassed by Clayton. Gemma was knocked out on the cobbles and Kylie tried to intervene but got stabbed. She reached David down the street and collapsed in the middle of the road. David tried to keep her talking, but Kylie passed away in his arms, much to his devastation. Paramedics arrived on the scene but were unable to bring Kylie back to life.

Clayton was later sentenced to 15 years in prison for Kylie's murder, with Gemma choosing to stand up and testify against Clayton for his actions.

Kylie Turner was quite fesity and fiery, and often clashed with fellow fesity girl Tina MacIntyre. Kylie came from a rough background but did better herself when she moved in with David Platt and married him. She did not totally shun her working class roots, as she still dabbled in drugs and kept in touch with some people from the Ecclestone Estate. 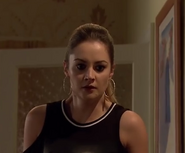 Kylie just after she kills Callum when defending Sarah Lou.