Lisa Horton was born on the 18th November 1964 to Jeff Horton and Doreen Horton. She was their only child.

Terry introduced Lisa to Jack and Vera in February 1992, and Vera was delighted to hear Lisa was pregnant. Vera treated Lisa like a daughter. Lisa Horton married Terry Duckworth in May 1992. Terry was in prison at the time and let out on compassionate grounds for the day. He was handcuffed to a prison officer but he persuaded the gullible prison officer to take the handcuffs off so he could pose for 1 picture. Terry seized his chance and ran off, with the prison officer and police escort in hot pursuit. Terry was later captured and sent back to prison. Lisa gave birth to Tommy in September 1992. However, Lisa got fed up of being a prison wife and started to fall for Des Barnes. Vera got worried, and she was not as nice to Lisa as she used to be when Lisa began to spend more time with Des. Vera told Terry about Lisa and Des. In November 1992, Terry had 2 thugs beat Des up. Vera was furious when Lisa decided to move back to Blackpool.

Des Barnes called in on Lisa in Blackpool in January 1993 and she eventually moved back to Weatherfield, even though Des lived opposite the Duckworth's. Vera hate this and her feud with Lisa continued.

In February 1993, Lisa was crossing the road when she dropped her shopping. As she was picking it up she was accidentally run over by a man who looked like Reverend Ashley Thomas from Emmerdale. She was 28 years old. Her lover Des Barnes tended to her as a crowd gathered and the man who ran her down was in shock. Lisa was taken to hospital. She suffered a relapse when Des was by her side. The doctors did everything they could but Lisa died. Des was aghast, and cried over her dead body.

Baby Tommy was looked after by his grandparents Jack and Vera in the wake of Lisa's death. Terry was released from prison but saw pound signs and agreed to sell baby Tommy to his late mother's parents Jeff and Doreen Horton. Jeff and Terry agreed to tell Jack and Vera. Terry said he was doing it to help Jack and Vera out, but Jack knew Terry was profiting from it so he hit him and told Terry and Jeff to leave, and they all did.

24 years after Lisa died, in November 2017, a very similar incident happened on the very same spot outside The Rovers when Robert Preston was run over but luckily he did not join Lisa in heaven. 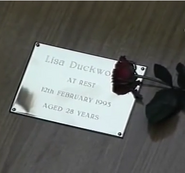