Martha Longhurst[1] was a character in Coronation Street from Episode 2 (14 Dec 1960) to Ep 357 - 13 May 1964. She was the drinking partner of Ena Sharples and Minnie Caldwell. In May 1964, Martha died of a heart attack while in The Rovers Snug. The character had been controversially axed by producer Tim Aspinall. Martha's voice was heard in Ep 1501 - 16 Jun 1975 when Betty Turpin claimed to hear her voice, even though Martha never met Betty, but Betty had heard of her. Martha was played by actress Lynne Carol.

Martha Hartley was born on the 2nd September 1896 in Weatherfield to Jack Hartley and Mary Hartley. Martha was one of 3 daughters born to the couple. One time, Martha had a fling with Handel Gartside. She dated Eddie Brown but he was gassed in the war. In 1919 she married Percy Longhurst. Martha had at least 2 miscarriages before they had a daughter Lily Longhurst in 1926 and a son Harold Longhurst in 1927. Harold died in late 1929 aged 2 after drowning. The funeral was kept quiet. Only Albert Tatlock, and Martha's friends Ena Sharples and Minnie Caldwell knew about her second child. In 1946, Martha's husband Percy died aged about 50.

By December 1960, Martha was 64 years old and was retired, she loved gossiping with Minnie and Ena in The Rovers snug. Martha once reckoned Christine Hardman was as mentally disturbed as her mother and Ken Barlow shut her up. Underneath the gossipy flighty exterior lay a more insecure woman whose son had drowned in 1929 aged 2 and had a tough marriage, and a estranged daughter.

In 1963 Martha had health problems and went to see the doctor who put her on some pills but she kept this quiet from her friends. In March 1964, Martha met up with old friend Ted Ashley, who had been living in Australia for the past 40 years, and came to England for a visit. Martha took a shine to him but he rejected her and returned to Australia alone.

In May 1964, Martha attended Frank Barlow's leaving do. She ordered a sherry and felt hot and queasy so she went to sit alone in the Snug of The Rovers Return. The other punters were singing along to "Waiting At The Church". She undid her top button of her coat. She then felt stabbing pains and slouched over the table. Martha suffered a sudden heart attack. A few minutes later, she was found by Jack Walker who summoned for someone to call the doctor quickly. Len Fairclough tended to her and checked for a pulse but there was no pulse. Len quietly said "She's dead". Martha was 68 years old.

The party was cut short by her death and everyone left quietly. Ena and Minnie grieved for Martha. Ena said how old she was when she died, saying that at 68 it can happen. On the 20th May 1964, a week after she died, Martha was buried with her husband Percy.

After Martha's funeral on the 20th May 1964, Ena and Minnie had to come to terms with Martha's death, and the fact that the trio was now a duo. They carried on drinking in the Snug, sad to look at an empty 3rd seat. On occasions, from July 1965 and up to April 1966, Clara Midgeley would join Ena and Minnie in the Snug. A Martha substitute she was not, so Ena, Minnie and Clara did not have the same ring to it as Ena, Minnie and Martha had. Clara was a cleaner. Clara left the area in April 1966.

In July 1970, Handel Gartside returned to Weatherfield after 33 years of living in Canada. He was chatting to Ena and Minnie in The Rovers and said he needs to buy 3 drinks, as he is sure Martha will come into the pub in a minute but Ena broke the news that Martha died 6 years ago.

In May 1974, on the 10th anniversary of her death, the occasion was marked.

In June 1975, a month after the 11th anniversary of her death, it was believed Martha's ghost was haunting The Rovers. Betty Turpin also 'heard' Martha's voice in the Rovers, despite never meeting Martha, and her dying five years before Betty arrived on Coronation Street, leaving the situation ambiguous. Betty had vaguelly heard of Martha, and Ken Barlow suggested Betty overheard someone describing Martha. Ena and Minnie had never described her to Betty. Betty was sure she heard what she heard. The mystery surrounding the ghost of Martha was never fully resolved.

Once Ena left the area in 1980, and Minnie had left 4 years prior to Ena, the mentions of Martha decreased. However, in September 2011, Roy Cropper wondered why there was strange noises coming from inside his cafe, Roys Rolls, Rosamund Street. Dennis Tanner joked it was the ghost of Martha Longhurst, Roy had no idea who Martha was and Dennis said it was before Roy's time. Martha had been dead for 47 years by 2011. 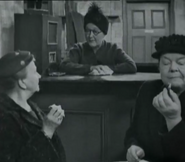 Martha in 1963 with Ena and Minnie sat down.

Martha has a heart attack in May 1964, which is fatal.
Community content is available under CC-BY-SA unless otherwise noted.
Advertisement