Johnny Briggs
Michael Vernon Baldwin was a character in Coronation Street from Ep 1642 - 11 Oct 1976 to Ep 6265 - 7 Apr 2006. He was the Cockney spiv who owned Baldwin's Casuals, Coronation Street on the factory side of Coronation Street, and then later Underworld. Baldwin was quite a stern boss and was driven by greed. Mike was the Del Boy of Weatherfield as well, a wheeler dealer. He became fierce rivals with Ken Barlow after his affair with Ken's wife Deirdre Barlow. His most prolific storylines was probably the Ken, Deirdre and Mike love triangle in 1983. Mike was played by Johnny Briggs.

Michael Vernon Baldwin was born on the 16th February 1942 in Bermondsey London to Frankie Baldwin and Mary Baldwin. He grew up in a basement flat in Bermondsey with his parents and brother Harry Baldwin. One of Mike's schoolfriends was Paul Tapp. In 1959, his older brother Harry had recently married and in August that year, a lovestruck 17 year old Mike had an affair with Harry's new wife Viv Baldwin. In May 1960, Viv gave birth to a son Danny Baldwin who Harry thought was his, but all along he was Danny's uncle.

Mike set up a underwear business and opened up a factory in the East End of London. In 1976 he decided to expand his empire, so he opened up a factory up north in Weatherfield, a suburb of Salford. He felt there was more industry there, while keeping his factory in London. He left Paul Tapp to run operations in London. Mike's wide boy father Frankie was not allowed to be part of the business, father or no father of the owner. Mike inherited his spiv image from his father who made Del Boy Trotter look squeaky clean.

During his time in London he visited the Queen Victoria pub located in Albert Square. It is possible he met Den and Angie Watts, who became the licensees of the Queen Vic in 1975, one year prior to Mike arriving in Weatherfield.

Mike Baldwin acquired the former Mark Brittain Warehouse, Coronation Street in October 1976 after it was refurbished due to a fire the year before. He told the workers that he now owned the place. Mike was also a tough boss. He started as he meant to go on. "If I come back and find another card school, it's down the road for the lot o' yer" he shouted at staff. Mike then shouted at a delivery driver who was just standing around, after asking him what job he is supposed to be doing, which is unloading. "Then look as though you are unloading" Mike bellowed at him in reply.

Mike turned it into a underwear factory and renamed it Baldwins Casuals. As Mike was a Londoner, from 250 miles away, he had to adapt to life in a Northern street among Northern people. He bought Number 5 Coronation Street and renovated it as it had remained virtually unchanged since 1902 when the street was built. Mike installed a new brick fireplace and open plan front room. Mike soon sold the property to Ray Langton and his family in March 1977. Being the new factory boss, Mike had a tough edge to him and planned to shake things up in Weatherfield. He took on Ernie Bishop as a wages clerk. In January 1978, Ernie was shot dead in a wages snatch and Mike helped the police with their inquiries.

Mike soon gained a reputation in Coronation Street as a spiv, the flash dressing crooked businessman with an eye for the ladies. One time in 1979, Stan Ogden hit the fire alarm on Mike's factory as it was going off during the night. Stan damaged it and Mike wanted recompense. In late 1980 Mike's dad Frankie Baldwin arrived in Weatherfield. Frankie was every bit Mike's father, a Cockney spiv. Frankie revealed Mike's middle name to his neighbours and friends in The Rovers. Frankie conned Fred Gee out of money. Mike said people are not soft round here and that Fred is a big man and will go after Frankie. Mike's advice to Frankie was for him to get back to The Smoke, aka London. Frankie quickly scarpered to London before Fred found out he had been conned by Frankie. Mike bought 46b. St Mary's Place in 1981.

In mid 1982, Mike was told his father had died. Mike briefly dated florist Maggie Redman and got her pregnant.

In late 1982, Mike became very close to Deirdre Barlow, wife of boring Ken Barlow. At 40 he was still a bachelor despite having many relationships. In the end, Deirdre chose Ken and Ken told Mike to stay away. Ken and Mike started to develop a fierce rivalry. In early 1984, Mike wanted access to his son Mark Redman but Maggie made it hard for him. Even Bet Lynch vouched for her friend Mike against Maggie. In May 1984, Billy Walker found out about Mike and Deirdre's affair and planned to use this as leverage but Mike knew about Billy's many dodgy deals so Billy backed off. Mike later employed former Rovers potman Fred Gee as a delivery driver. Fred had been sacked by his nasty landlord Billy Walker, so Mike took Fred on. While Mike was away on business in October 1984, Fred and his mate Jack Duckworth sold shirts. Fred posed as Mike. When Mike found out he sacked Fred and Fred left the area.

Mike later dated Susan Barlow much to the chagrin of Ken. Ken even thumped Mike in January 1986. Mike and Susan later married. Ken had to put up with his most hated rival as his son in law. However Mike and Susan's marriage did not last. She left pregnant with his child. Hilda Ogden cleaned for Mike until she left Weatherfield in December 1987.

In 1988, Mike's habit of taking other men's wives struck again when he fell for the affections of Linda Farrell. Mike had done some business with her husband Graham Farrell. When Graham found out, he had Mike beaten up.

Mike agreed to sell his factory to Maurice Jones in 1989 so that Maurice could redevelop that side of the street, and Mike had a new factory built. In April 1990, Mike and Ken had another fight in The Rovers, which Mike won this time. He then dated Jackie Ingram, widow of textiles boss Peter Ingram. Mike and Jackie married but it did not last as Jackie thought Mike was out for himself when he tried to get hold of her lat husband's factory. One time she even held a gun to him when she found out. Mike married Alma after a long on off relationship. In the 1990s, Mike occasionally did business with Steve McDonald. Mike ran several businesses through the decade.

In 1996, Mike and Don Brennan developed a rivalry and Don thought Mike had conned him. Don torched Mike's factory and kidnapped Alma and they ended up in the canal but survived. In October 1997, Don knocked Mike out and held him captive in his factory but Angie Freeman saved the day. Don tried to kill Mike that day by trying to run him over but ended up killing himself. Mike could finally move on with his life now Don was dead. In 1998, Hayley Patterson started work at Mike's factory, but when Mike found out she used to be a man, he taunted her, and this earned Mike a pint of beer in his face from Hayley's boyfriend Roy Cropper. Mike became business friends with Greg Kelly. Mike was seduced by Julia Stone and he slept with her. She then threatened to tell Alma about it, and she and Greg Kelly almost conned Mike out of £10'000. In late 1999, Mike was pulled over for drink driving. By then he had yet again started dating a younger woman, this time it was Linda Sykes. Mike's son Mark Redman had an affair with Linda in 2000 and Mike was livid when he found out. That year, Mike and his mates were held hostage in Freshco's by Linda's brother Dean Sykes.

In 2001, Mike found out that Adam Barlow was his son, as Susan had left him while pregnant with their child in 1987. In June 2001, Mike became a widower when Alma died after a battle with cervical cancer. Mike turned 60 in February 2002.

In 2004, Mike's previously un-mentioned nephew Danny Baldwin turned up with his adult children to help Mike run the factory. Turned out that Danny was Mike's son as he once had it off with Viv Baldwin's his brother's wife. Mike did not like Sean Tully working at the factory and told him to go but Danny wanted him to stay.

In 2005, Mike started to become forgetful and it transpired that he had Alzheimer's. Mike died of a massive heart attack aged 64 in April 2006, while being comforted by his arch rival Ken Barlow.

Mike's funeral took place shortly after he died. He would be well remembered by his family and neighbours as he was a popular man in the area. His son Dnany and family ran the factory for a while longer before selling up and leaving the area later on. Mike was mentioned in April 2013 when Ken compared Tracy Barlow's boyfriend Rob Donovan to him, due to Rob also being a rogue. Rob was also in a feud with Peter Barlow, Ken's son.

In 2016, Adam, Mike's son by his much younger wife Susan, returned and went into his dad Mike's old factory and toasted to his late father. He was soon sent away by the present owners Johnny Connor and Aidan Connor and being told they own it now. Adam later displayed traits that his father had and this worried his grandfather Ken as Ken was a fierce rival to Mike. Adam and Aidan became friendly later on.

In 1980 and 1981 Frankie Baldwin said that Mike was his only child. However in 2004, Mike was said to have a nephew, who actually turned out to be his son. This was Danny Baldwin. Danny came to help Mike at the factory. Danny then mentioned his "father" Harry Baldwin. This contradicts the original scripts. From 1976 to 2003, Mike never mentioned a brother and was always said to be an only child. 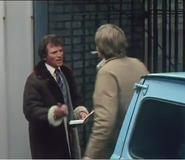 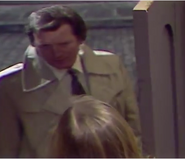 Ken finds out about Deirdre and Mike. Mike calls round. 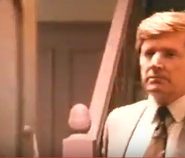 Deirdre chooses Ken and Ken tells Baldwin to stay away.

The rivalry between Ken and Mike carries on for many years. Punch ups galore. 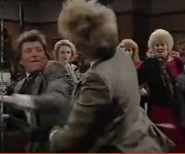 Ken and Mike have another altercation. 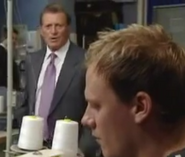 Mike Baldwin does not like new recruit Sean Tully.

Mike dies in 2006, in Ken's arms.
Community content is available under CC-BY-SA unless otherwise noted.
Advertisement