Number 5 Coronation Street is a house in Coronation Street. It was built alongside the rest of the terrace in 1901 and first occupied in August 1902. Esther Hayes was the longest standing resident, and by 1960 had been living at No 5 for 36 years, since her birth. She left the Street in 1962 to move into a modern flat on Moor Lane. Minnie Caldwell applied to take over the tenancy, and moved in shortly afterwards, following her mother's death in the house they shared in Jubilee Terrace. Minnie lived at No 5 from 1962 until she moved away from the area in 1976. In November and December that year, the house was refurbished. After Minnie left as the last tenant in 1976, the house was then sold and subsequent owners have been Mike Baldwin, Bert Tilsley and the Battersby family. Now Chesney Brown and Gemma Winter live there with their quads, and on occasions, Gemma's mother Bernie Winter and twin brother Paul Foreman.

In December 1960, Esther Hayes lived at No 5. The house had remained virtually unchanged inside

since 1902. After Esther left the Street in May 1962, the tenancy was taken over in August that year by Minnie Caldwell who took in several lodgers including Jed Stone. Jed returned to the area in 1966 but was later arrested for more crime. Minnie cried as Jed was taken away. In 1970, crazed soldier Joe Donelli held Minnie hostage at No 5 but Stan Ogden intervened before Joe shot himself dead. In 1974 Minnie took in Eddie Yeats, who was a cellmate of Jed, by 1974, Jed had not lived in Coronation Street for 8 years.

In early 1976 Minnie went to visit Handel Gartside in Whalley Bridge. In October that year, Handel visited Ena Sharples in Coronation Street to say that Minnie was not returning to Weatherfield and was giving up the tenancy. The landlord, Wormold then had No 5 put on the market.

After being unchanged for 74 years, the house needed major renovations and needed bringing into the 1970s. In December 1976, new kitchen units were installed and the wall separating the living room and the front room was knocked through to make one big room, and the old fireplace was removed, and a new brick fireplace was installed. The walls were painted cream. Ray Langton and Len Fairclough did the renovations. The house interior looked much brighter inside.

Mike Baldwin briefly owned No 5, and lived at No 5 in 1977 then sold it that year to Ray Langton, his wife Deirdre and daughter Tracy. Deirdre sold the house after Ray left her in late 1978.

In 1979 the Tilsley family moved into No 5. This was Bert Tilsley, Ivy Tilsley and their 21 year old son Brian Tilsley. Bert died in January 1984 in a mental asylum. Brian, Gail and Nick lived there for years with Ivy. In 1988, Ivy remarried to taxi driver Don Brennan. Don made No 5 his home. In February 1989, Brian was stabbed outside a nightclub and died soon afterwards. Ivy latched onto the memory of her son and this affected her and Don's marriage. Don had affairs. Don got into gambling and even begun stalking Denise Osbourne, whom he had feelings for. Denise blamed Ivy until Don owned up. Don and Ivy split up for good in 1994 and she left the street in July that year. Don later took in lodger Ashley Peacock when Ivy died in August 1995. Don went into business with Mike Baldwin but Mike ripped Don off and Don wanted revenge.

In June 1997 the house was bought by the council when Don Brennan went missing. Unfortunately for the residents of the quiet back street their peace was to be shattered by the council's decision to house a problem family there. Some of the relics of the previous residents, the Brennans, would lay undiscovered in the loft of No 5 for years, including Ivy's old diaries.

This problem family was The Battersbys. Les Battersby, Janice Battersby and Les' daughter Leanne Battersby and Janice's daughter Toyah Battersby. They argued a lot and played their TV loud as well as music. This irritated the other residents of the once quiet street. Loudmouth Les used to get into fights, such as headbutting Curly Watts. Curly had complained about their loud music being played so barged into No 5 and threw the CD player out of the window, hence why Les headbutted him. In October 1997, former owner Don Brennan returned after a few months missing. He claimed to be dying of cancer. Les even challenged Don when he saw Don looking around the back yard of No 5.

Residents over the years[]

Minnie and Ena in 1974 near the kitchen. 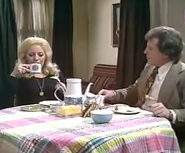 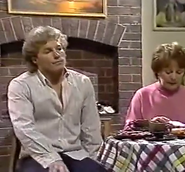 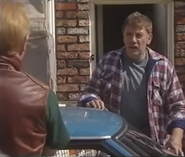 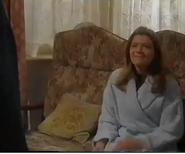 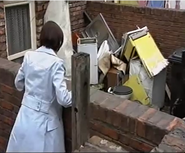 Les and Cilla in No 5 in 2005. Typical Battersby family leaving the house a mess. 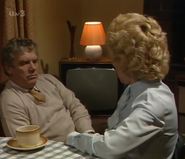 Don and Ivy inside No 5 in February 1988.
Community content is available under CC-BY-SA unless otherwise noted.
Advertisement