Marc Baylis
Robert Darren "Rob" Donovan was a character in Coronation Street who first appeared in July 2012, and appeared regularly until November 2014. He went onto make two brief returns, first from December 2015 to January 2016 and then April 2017 to 8 May 2017. He is the younger half brother of Carla Connor. Rob is a very streetwise guy and is also a villain. He was responsible for the murder of Tina McIntyre in the 2014 "Who Killed Tina?" Storyline, and was imprisoned later in the year after her murder.

Being imprisoned wouldn't keep Rob down however. In December 2015 a now bitter Rob sent out visiting orders to numerous street residents such as ex-Tracy Barlow and also Johnny Connor, the latter whom he blackmailed with information he is Carla's true father. In this time Rob managed to ruin Tracy's relationship with Robert Preston, but Carla brought his blackmailing to an end by revealing the truth of Johnny's secret.

Rob returned once again in April 2017, however this time following an escape from prison after his prison van crashed. He went into hiding fear of retribution from criminals he was testifying against, and turned to Tracy for help. They planned to runaway together, however when Tracy was arrested in suspicion of trying to kill her father Ken, Rob handed himself in and gave an alibi. He was offered protection and transferred to a more secure prison.

Rob was played by Marc Baylis.

Robert Darren Donovan was born in about 1977. He was the younger half brother of Carla Donovan. Their mum was Sharon Donovan. Sharon was unmarried at the time of him and Carla's birth, she was a single mother. Rob never knew his biological father. Sharon had previously dated Johnny Connor who was Carla's father but not Rob's.

Sharon later married a man called George. George used to abuse Rob and Carla. When Rob was 15 in about 1992, Sharon told him that Johnny was the father of his half sister Carla. Rob and Carla grew up on a council estate and their mother worked as a drug dealer. Rob ended up living alone with her in 1999 when Carla married Paul Connor and moved away. When his mother got into a debt at some point in the early 2000s, Rob decided to take part in an armed robbery as a getaway driver to help clear her debts, however ended up being arrested and given an eight-year prison sentence. In 2011, a still imprisoned Rob contacted Carla and revealed that their mother had passed away.

Rob Donovan arrived in Coronation Street in July 2012 to see his sister Carla Connor. Rob was soon appointed as a

manger at Underworld. He was compared to former factory boss, the late Mike Baldwin by Ken Barlow due to his cocky nature. Rob soon started seeing Tracy Barlow and decided to help her open up a pawnbrokers shop. He even went along with Tracy's plan to use her daughter Amy Barlow's savings to fund the business. Rob and Tracy started doing illegal scams and one time this was witnessed by Tina McIntyre. In May 2014, Rob also found out that Tina was seeing Peter Barlow, Rob's brother in law, and Carla's husband. Rob had seen them meeting up a few times and had suspected. Peter was 26 years older than Tina.

One time, Rob was going to tell Carla but as she was pregnant, she suffered pains and was taken to hospital. Rob decided not to tell her. Carla had a miscarriage. Late in May, Rob went to see Tina. He said she should end things with Peter, to save Carla pain. Tina threatened to expose his dodgy scams, and also to tell Carla. Rob chased Tina and she ran onto the balcony. During a scuffle, Rob accidentally pushed Tina and she feel 6 or 7 foot onto the cobbles below. Rob thought she was dead but a few minutes later she got up, in severe pain. She still threatened to expose Rob so he bludgeoned her to death with a metal pole. Rob then ran off into the night.

He hid the pole in Ken Barlow's back yard shed. Rob later confessed to his sister Carla. She said he needs to own up. Rob says he wants to be a father. Carla say there will still be time, he will be 60 when he comes out, so can meet a younger woman and have children. Rob went on the run but was arrested in a warehouse in November 2014 and sent to prison. Rob was later given 25 years in prison, a life sentence, both for killing Tina and also allowing Peter to be wrongfully convicted of the crime. Rob refused contact from either Carla or Tracy.

In December 2015 a bored Rob sent out visiting orders to residents, mostly ex-Tracy and Johnny Connor as part of a revenge plot. Rob said he will make them pay. Tracy visited him, and he said life is wasted here. Rob may be the thorn in the side of Nick and Carla. He asked Johnny Connor to come and visit him. He called him "Uncle" Johnny and told Johnny that his mother Sharon Donovan had told him she slept with Johnny nine-months before Carla was born. Rob tells Johnny that he will give him a week to pay up £10,000, or else he will send another visiting order, this time to Carla. Johnny leaves, but not before letting slip that Tracy is in fact in another relationship, this time with her ex-husband Robert Preston. Rob contacted friends on the outside to dig up info on Robert Preston and had a mobile smuggled in. Just before Christmas he phoned No 1 Coronation Street and Robert answered. Rob said Robert had better watch out and said he would be sending him a visiting order to his workplace - The Bistro. Robert arrived at the prison on Christmas Day to find out what Rob wanted, and Rob revealed that Tracy has been visiting him. Robert leaves the prison, apparently not believing Rob and intending to marry Tracy, but this was far from the truth as Robert humiliated her in the Rovers and revealed she had been seeing Rob and intended to get back with him, causing shock to the residents.

Tracy went to visit Rob a few days later, still intending to get back with him when he is "released" but wanted an apology for telling Robert the truth. But after making sure Robert was done with Tracy, Rob took delight in telling Tracy he was stringing her along all this time, and that there was no appeal for him to get released. He also told her there was no chance of reconciliation, especially after she dobbed him into the police. Upset and angry, Tracy attempted to attack Rob which only lead to her being forced out of the visiting room by guards, bringing amusement to both Rob and his cellmate.

Rob phoned Johnny a few days later asking about his money, but was told by Johnny he informed Carla on the truth and won't be getting a penny. Rob them inquired if his kids Aidan and Kate know the truth, and Johnny warns Rob if he bothers his kids he will report him to his governor. At that precise moment, a guard walked into Rob's cell, catching him illegally using a mobile phone.

Carla went to visit Rob after the New Year in January 2016. He continued to demand his money, claiming that he will tell Aidan and Kate, but Carla informed him that it isn't her problem. When Rob blamed Carla for his imprisonment, she pointed out it was for his own good and she had given him a second chance before. Before leaving Carla told Rob that when he is released to never come looking for her again. With that Rob's mind games had come to an end, with him now very alone after alienating both Tracy and Carla and now forced to live out his life sentence without any support from the outside.

Over a year later Rob managed to escape from prison, the news of which was relayed to Tracy by the police shortly after her father Ken was pushed down the stairs. Tracy began to visit Rob in secret and brought him food, water and medication, causing suspicion to those around her to her where she was going. This caused a strain in her relationship with new boyfriend Luke Britton, which resulted in him dumping her. Tracy then headed to an abandoned property and informed a hooded Rob it was another relationship of hers he has destroyed.

Rob hid away in a derelict factory. He had a gabby leg and Tracy bought him bandages and antiseptic wipes. Rob said he had got into trouble in prison and other lags would kill him if he returned. Rob did have regrets over killing Tina 3 years earlier. Tracy did take Rob to a pub where they were not known. Rob wore a baseball cap. Later on Tracy booked a holiday in The Peak District to help Rob get away. Rob reluctantly agreed to hide in the boot. Rob hid away in a storage room in the cottage and was mistaken for a burglar by the owner. Tracy vouched for Rob. The police later tracked Rob down after a phonecall Amy made to her father Steve McDonald. Rob drove off in a car and managed to escape the police.

The car broke down and Amy was upset at Rob for leaving behind Tracy, believing she was being arrested for helping Rob. However Rob ended up revealing that Tracy was taking the blame for pushing Ken down the stairs, as she was covering for Amy. Amy revealed she didn't push Ken. When she refused to go with Rob, Rob gave her money and decided to go alone. However he had a change of heart and rather than fleeing to Scotland, he stopped Amy from hitching a ride with a stranger and took her back to Weatherfield where Tracy was in a court hearing for Ken's attack. Rob burst into the court room and told them that Tracy was innocent of the crime, and that she was with him at her florists the time it happened. Rob was dragged off by security and taken back into custody.

On the 8th May 2017, Rob was informed that he was due to be transferred to another prison where he would be put into solitary confinement for his own protection due to people being after him. Tracy (who was now off the hook for Ken's attack) was allowed to spend 10 minutes with Rob before he was due to be taken away. The pair of them then made out with each other as they had several minutes left.

Rob is due for release from prison in 2039 when he will be 62 years old. As of 2020 he is a mere 5 and a half years into his sentence and has 20 years to go. There is always a chance he may get out early on technicalities. Seeing as the law completely sucks in Corrie world, Rob does have a chance.

Rob and Tracy first meet when fighting over a cab (2013) 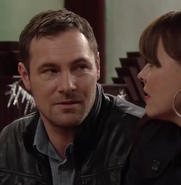 Rob confesses to Carla that he killed Tina

Rob's scheming comes to an end after a visit from Carla (final appearance?) 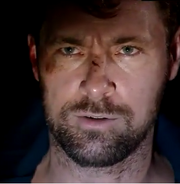 Rob returns in 2017, having escaped from prison. 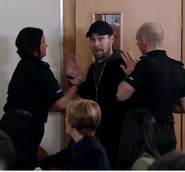 Rob Donovan says Tracy did not try to kill Ken. 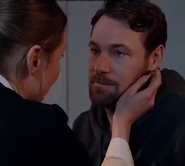 Tracy and rob kiss as he is sent to a prison away from Strangeways.
Community content is available under CC-BY-SA unless otherwise noted.
Advertisement