He is currently the owner of Nick's Bistro in Viaduct Street and is engaged to Michelle Connor.

Julian Kay appeared as the character for guest appearances in 1996, 1999 and 2003, then followed by Tristan Gemmill who took over the role as a regular in 2015. Maybe Robert would have stayed away from the cobbles if he knew what bad luck would come his way since his return as he has battled cancer, addiction and was run over, and being in a relationship with Michelle who is not exactly known for her tact. Robert was killed in Ep 9961/9962 (25 Dec 2019).

Robert Preston was born on the 23rd September 1971 to Maurice Preston and Shirley Preston. Robert grew up in Weatherfield. He got a job as a carpet fitter.

Tracy met 25 year old Robert in 1996, and the pair of them got engaged and married in November of that year. After their marriage they both left the street and moved to London, where Robert began working as a carpet fitter. However in December 2002 Tracy had an affair with his mate, and taking Robert's van returned to Coronation Street and lied to her parents Ken and Deirdre that Robert had the affair. But Robert turned up on New Year's Day and revealed the truth. Regardless of this, he still loved Tracy and asked her to return home, but she refused so Robert returned back to London alone.

Later that year, he lost his father to cancer.

Despite divorcing from Tracy, Robert still missed her, even after marrying for a second time to a woman named Joni Preston. Robert qualified as a chef and moved up North with Joni to open up a restaurant, but still couldn't get Tracy out of his head.

In July 2015 Robert read about the death of Deirdre in the paper, and returned to Coronation Street for her funeral and reunited with Tracy for the first time in twelve-and-a-half years. The pair of them began making out on the day of the funeral in the living room of No.1 Coronation Street, much to the disgust of Ken who walked in on them. Robert then left, leaving Tracy and Ken to settle things. Tracy and Robert begun a relationship soon after and he moved into No 1. Robert got a job at Underworld, Coronation Street. His boss Johnny Connor visited Tracy's ex Rob Donovan in prison and told Rob. Rob was not happy. He managed to have a mobile smuggled into prison by someone. Rob rung No 1 and conveniently Robert answered. Rob told Robert his name was Rob and to say hello to Tracy for him.

Rob sent Robert a visiting order at the Bistro, and went along to see what he wanted. Rob gleefully revealed that Tracy had been seeing him and wants him. Robert left the prison and went to visit Tracy in the Rovers where she expected a proposal from him after discovering a hidden engagement ring. But Robert then revealed to the shocked Rovers Tracy was visiting her ex, before leaving. Ken kicked Tracy out of No.1 and Robert stayed with him for a few days, before leaving the street (although he kept his job at the Bistro).

On New Year's Day Robert got the day off work and headed to a casino, where he bumped into Carla who had just been hit by the revelation Johnny Connor is her father. After gambling and drinking, the pair of them headed to a hotel room and had sex. But regretting it, Carla headed back home and Robert returned to work. Carla said she could expose Robert to Tracy but Robert said he could make her life hell if she does.

In January 2016, Rob wanted to buy into Nick's Bistro and asked for a 20% share. He said he was a good chef and had increased sales since he started work there. He then said he would leave if not, and Nick reluctantly accepted.

In June 2016 when it transpired that Tracy had been blackmailing Carla for months over knowledge of her affair with Robert, and ultimately ruining her wedding to Nick, it was the final straw for Robert and he left Tracy for good. But he soon found himself feeling the wrath of Nick, who wanted the Bistro back. At this time Robert began to struggle running the business, which only delighted Nick further. Robert took to drinking heavily and when he went to drive Nick reported him out of spite, leading to Robert losing his license. Robert eventually caved in and gave Nick 50% of the business, on the condition Leanne returned as manageress.

He began showing support to Michelle Connor, and when she split with her husband Steve McDonald after finding out about his affair and impregnation of Leanne, they officially became a couple. However things didn't go as smoothly as planned for the new couple, as Robert's old friend Richie (who has never been mentioned before) began sniffing around and wanted Robert to do some dodgy things for him. During a confrontation in the Rovers an angry Richie accidentally stabbed Chesney Brown, prompting a guilty Robert to give the lad compensation. Robert eventually helped the police arrest Richie, however he was let out on bail.

Someone began harassing Michelle, which involved kidnapping and locking her in the boot of a car. Believing it was Richie, Robert confronted him and beat him up, which led to him being locked up. Whilst instead, Robert began to believe Richie was innocent after all of the stalking. It soon turned out the stalker was Michelle's ex Will Chatterton, who hoped to get back with her after Robert was locked up. Will was exposed and arrested by the police.

After spending a few weeks in prison, it is clear it took its toll on Robert as he appeared to suddenly have grey hair when Michelle visited him in October 2017. Being with Michelle and putting up with her persistent problems probably contributed to Robert going grey as well. However this maybe down to him not having access to hair dye, although someone he obtained a nice tan. He is then told by Michelle that may have a lump in a delicate area of his body. Shortly afterwards, he almost goes to the "Lisa Duckworth Cemetery of Weatherfield residents who were run down outside The Rovers". Kate Connor accidentally ran him down. He is sent to hospital but is fine, apart from the lump which Michelle reveals to the doctor. The doctor examines his testicles and wants to remove the lump in order to have a proper test done, which Robert doesn't want to do and leaves.

One day, Robert has to deal with characters constantly calling him a hero. A guilty Chesney gives back some of the compensation Robert gave him over the stabbing, and because the writers love recycling story elements he is close to gambling again to make more money, but decides not to as Tracy catches him at the cab office. Instead he donates it to the church, but Billy doesn't wish for him to do it and arrives at the Bistro to give it back (Robert should count himself lucky, Billy mostly steals big wads of cash). Chesney is also randomly working at the Bistro because it is short staffed, and Robert is worried about it not coping as he is going to take two weeks sick leave (despite the fact it was doing well without him). As characters keep getting on his case, Robert is forced to reveal he has cancer, much to their shock.

While never confirmed, Robert could be related to Betty Williams (Nee Preston, later Turpin). Preston is quite a common name in North England but it is still a possibility, maybe his grandfather was the brother or cousin of Harold Preston, Betty and Maggie Cooke's father.

Julian Kay as Robert Preston in 1996 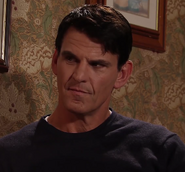 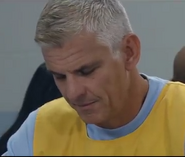 Robert in prison. The prison gift shop has run out of hair dye then?