Coronation Street Past And Present Wiki
Register
Don't have an account?
Sign In
Advertisement
in: Past characters, Characters first seen in 1983., Characters last seen in 2012.,
and 12 more

Terry Duckworth was a character in Coronation Street from 1983 to 1987 followed by recurring stints since 1992. He first appeared in Ep 2330 - 1 Aug 1983 and last appeared in Ep 7864/7865 - 11 May 2012. He is one of the most prolific villains of the show and is the son of the late Jack and Vera Duckworth. Originally a more good guy, who once lodged with Hilda Ogden and Stan Ogden in 1984, and a mate of Curly Watts and Kevin Webster, Terry's darker side surfaced in 1986 when he started womanising and burgled Alf Roberts shop, and spreading nasty gossip about Jenny Bradley, so much so that it earned him a whack from her father Alan Bradley. Terry got nastier and nastier, and by 1992 he had been done for assault, and later sold his son to his maternal grandparents.

He was played by Nigel Pivaro.

Terence Edgar Duckworth was born on the 4th June 1964, the eldest child of Jack and Vera Duckworth, who had married 7 years earlier. Terry was their only child. In around late summer, early autumn 1963, Vera had a brief fling with another man. Jack knew about it and beat the man up. Vera never knew Jack knew about the affair and did suspect Terry's paternity, but as Terry got older, he was so much like Jack, and Jack was sure Terry was his blood son.

In the early 1980s, Terry made friends with Kevin Webster and Curly Watts, local residents of Weatherfield.

19 year old Terry arrived in September 1983 in Coronation Street when his parents bought Number 11 Coronation Street. Terry became good friends with Curly Watts and Kevin Webster. The 3 of them hung around in the Rovers Snug, a throwback to Ena Sharples, Minnie Caldwell and Martha Longhurst back in the 1960s. In late 1983, Terry dated Sharon Gaskell and vied with Curly for her attention. Terry was initially cheeky but quite kindhearted. In 1984, he lodged with Hilda Ogden for a short time, helping her look after her ailing husband Stan Ogden. Terry even helped Stan place bets as Stan was too ill to do it himself. But Terry realised that the constant errands and lending money to Stan was too similar to his relationship with his parents (and was the reason he left home in the first place) so he returned home to a delighted Vera, feeling obliged to be with his family.

Terry began to go out with Andrea Clayton in 1986, much to the disapproval of her parents. The parents got involved in a feud with Jack and Vera, although Terry and Andrea continued seeing each other. The pair had sex and Andrea fell pregnant, although she felt stupid for giving her virginity to Terry. Once finding out he would be a father he was delighted and wanted to be involved in supporting them and even offered marriage. But Andrea wasn't interested in Terry and left the street with her family, leaving him broken-hearted. It was around his time that Terry began to slowly take a dark turn in his personality.

In 1986, Terry started dating Jenny Bradley and his darker side started to emerge when he spread vicious rumours about her, which lead to Jenny's father Alan Bradley confronting him, and when Terry wound Alan and Jenny up more, it lead to Alan punching him in The Rovers. In June 1987 Terry had an affair with the wife of an old army friend and fled Coronation Street. He did return for a few months in late 1988 when he needed more money. He was jealous of Kevin's marriage to Sally Webster and attempted to split them up, which caused Kevin to end their friendship. It seemed to hint at things to come as Terry was becoming meaner and unpleasant in personality. In December 1988 he decided that there was nothing left for him in Weatherfield and left for Bournemouth and was not seen again for the next 3 years.

Terry returned in January 1992 with his girlfriend Lisa Horton in tow, and revealed to his parents they were getting married. But in May that year Terry was arrested and imprisoned for GBH. The victim had a fractured skull. He got a day release from prison (with a guard escorting him) in order to marry Lisa at a church, but after marrying her made a run for it when the guard unlocked the handcuffs so Terry could take a photo, much to Vera's extreme persuasion. The police ran after him through the church yard but Terry got away.

Terry was soon captured when he hid out at Bettabuys and sent back to prison. Lisa gave birth to their son Tommy Duckworth in September 1992. In November 1992, Vera visited Terry in prison and let slip that she was seeing Des Barnes. While still in prison, in February 1993, Terry became a widower when Lisa was killed in a road accident.

In mid December 1993, Terry was released from prison and sold his own son, baby Tommy to his maternal grandparents. Jack punched him in the face and Terry left once again. He did return briefly in 1996 to cause more havoc and had a fling with Tricia Armstrong and got her pregnant. Vera was annoyed when Tricia said the baby was Terry's. Terry re sold Tommy back to the Horton family. Vera and Jack disowned him again she she cut him out of her will.

Terry returned in 1997 involving matters with his third son, newborn son Brad Armstrong. He sold his mum Vera a dodgy car in 1999 which involved the death of Judy Mallett.

Terry returned in 2000 as he was a kidney match for his son Paul Clayton. Terry only agreed to donate a kidney if he was to be paid, which his parents reluctantly agreed to. Although Terry did prepare for the operation, he got scared and backed out at the last minute and fled. His mother instead volunteered to donate her kidney, but complications during the process left her life on the line. Terry felt guilt for the act and went to see his mum in hospital, tearfully begging her to pull through. He came into conflict with his father who angrily sent Terry packing once again. But Terry watched from the hospital room's window Vera coming to, and was relieved that his mother was still alive.

A year later Terry slept with the wife of a crooked policeman, who got revenge on Terry by setting him up for attempted murder. Terry called upon his parents for help and stated that he was innocent of the crime. Jack decided to help his son out, realising that he was telling the truth. Terry was cleared of any wrongdoing and was released from prison in January 2002. He briefly went to stay with his parents and their lodger (and surrogate son) Tyrone Dobbs, before then leaving for Wolverhampton. Unlike his previous visits and departures, Terry left on better terms with his parents. Following his move to Wolverhampton, he went into business selling mobile phones.

Terry returned to Coronation Street in January 2008 following the death of his mother and comforted his father. Terry met his son Paul Clayton for the first time in over seven years, although didn't recognise him at first until Jack revealed his identity. After the funeral service it became clear about Terry's true motivations for attending, as he tried to make excuses to make sure that Jack didn't move in with him at Wolverhampton but to also urge his father not to sell his house to Tyrone, feeling that it would continue going up in value. It was clear, like usual, Terry was only looking out for an inheritance in the future. Terry had a drink with his father, before then leaving to return home. Before departing once again, Terry informed Paul that he might see him again "once the old man snuffs it". However Jack didn't fall for Terry's advice and informed Tyrone, Tyrone's girlfriend Molly and Paul that he considered them family. He would later sell his house to Tyrone.

Following Jack's passing nearly three years later in November 2010, Tyrone called Terry to inform him about his father's death. In true typical Terry form, he instead inquired if there was anything left to him in the inheritance. A disgusted Tyrone chastised Tyrone before hanging up the phone on him. Terry wasn't present at his father's funeral.

Terry made a surprise return to Coronation Street in April 2012 in which he planned to set up a night club on Viaduct Street. He got into a confrontation with a young man and knocked him to the ground, until an intervening Tyrone revealed that he was Terry's son Tommy Duckworth. It was revealed that Terry had bribed a Councillor to approve of the plans to build the nightclub, and that Terry tried to prove to the street residents he was able to do something successful in his life, even if it is a sleazy club. Unfortunately though, Terry borrowed the money from notorious loan shark Rick Neelan. The father of Tommy's girlfriend Tina, Joe McIntyre, had been hassled to his death by Rick two years previously.

The residents didn't approve of Terry's venture and halted further development when several protesters barricaded themselves into the property. The dodgy Councillor pulled out after being threatened by policewoman Kirsty Soames (Tyrone's girlfriend), thus stopping Terry's plans for good. Terry was distressed at his business not being able to go ahead, and at the fact Rick will want his money back with interest. Tommy made a suggestion to turn the property into a more cleaner and legit venture, although Terry was more concerned about getting a quick buck. He wanted Tommy to help burn down the property to claim the insurance. When Tina stopped Tommy from doing it, Terry later attempted to commit arson himself and later attacked Tina and knocked her out when she threatened to phone the police. When Tommy came across Tina and had her taken to hospital, Terry claimed that Rick had done it.

Tommy borrowed money from Tyrone which was inheritance money leftover from Jack, believing that Terry was going to use it to pay off Rick and get rid of him for good. In actuality, Terry planned to flee the street with the cash in hand, having finally gotten his hands on his late father's money. Terry got the money and began packing his bags at the flat, but was caught out by Tommy, who had just found out from a recently awakened Tina that Terry was the attacker. Tommy gave Terry a choice, stay behind and form a relationship with him, or leave with the money. In true Terry form, he chose to leave with the money. Aware of how cruel and greedy he has been over the years which has destroyed his relationships with friends and family (including his now late parents), Terry tells his son that he is glad he never grew up to be like him. With that Terry left the street for good, leaving Tommy to deal with Rick. 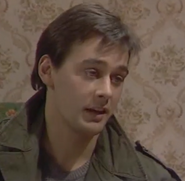 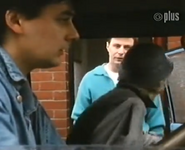 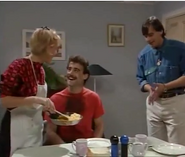 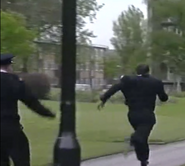 Terry escapes the prison escorts on his wedding day and makes a run for it. 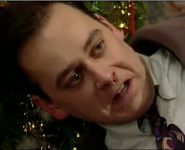 For selling his son, Terry is floored by his dad Jack. 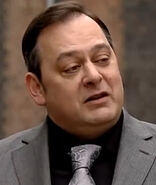 Terry's final appearance in May 2012
Community content is available under CC-BY-SA unless otherwise noted.
Advertisement