Christabel Finch (1979–1983)
Holly Chamarette (1985–1988)
Dawn Acton (1988–2001)
Kate Ford (2002–)
Tracy Lynette Barlow (formerly Preston, Cropper, and McDonald) is a character in Coronation Street who was born in Ep 1672 - 24 Jan 1977, the daughter of Ray Langton and Deirdre Barlow and the adoptive daughter of Ken Barlow. Tracy is one of the show's biggest superbitches, she has slept with most married men in the area and has a acid tongue that made her late gran Blanche Hunt look polite. Blanche was outspoken but never spiteful or nasty like Tracy.

Tracy has a habit of taking what is not hers such as other womens men and she even bludgeoned her boyfriend Charlie Stubbs to death in 2007. Tracy had a daughter, Amy Barlow, by Steve McDonald but Amy has not inherited Steve's quick wit and humour, more her mother's sharp tongue. A number of actresses have played Tracy since 1977. She has been played by Kate Ford since 2002.

Tracy Lynette Langton was born at Weatherfield General Hospital on the 24th January 19,77, the daughter of Ray and Deirdre Langton. In 1978, when Tracy was 1 year old, Ray abandoned Deirdre and left for Holland without saying goodbye to Tracy. Tracy grew up with no memories of her father.

When Tracy was 4 years old, Deirdre married Ken Barlow who later adopted Tracy. In late 1985 Tracy ran away from home but was found in Newcastle, after giving her home address and was returned home.

Tracy was a bit of a wayward child. As she got older she became more rebellious. This was bought on by Ken and Deirdre's rocky marriage, after he cheated on her in 1989. Als,o Tracy's rebellious streak was partly instigated by the fact that she never knew her real father, Ray Langton, who left when she was a toddler. Ken and Deirdre later divorced and Tracy started playing truant from school. As a teen, Tracy used to spend a lot of time in her bedroom playing her tapes.

In 1996 she became engaged to a man named Robert Preston and they got married and settled down in London.

In December 2002 Tracy became involved in an affair with Robert's best friend. She left Robert and returned to Coronation Street, where she made an unexpected arrival at No.1 where she gave a sob story that Robert was the one to have an affair behind her back. But on New Year's Day Robert turned up at the house and said she was the one who was being unfaithful. Despite this Robert claimed he still loved Tracy and wanted to give their marriage another chance, but she told him it was over.

In January 2007 she murdered Charlie, and in April was sentenced to 15 years in prison.

Tracy continued to be mentioned when Ken and Deirdre would often visit her in prison. They didn't want Amy to know her mother was a murderer, so made up excuses that she was "on holiday". But when in 2009 a boy at school began picking on Amy for her mother being a murderer, she was eventually told the truth and went to visit Tracy in prison.

Over three years into her sentence in May 2010, Tracy discovered her grandmother Blanche Hunt had passed away and asked the governor if she was able to get day release to attend her funeral and also support her daughter. The governor granted her permission, much to her delight.

Tracy attended with a prison guard. She grew jealous of Steve's marriage to Becky, and was angry at the fact the pair planned to adopt her. Tracy got into a fight with Becky, resulting in her being taken away from the hospital and returned to prison. Tracy vowed that she would find a way to get out.

Upon learning that neighbour Gail McIntyre was being held on remand accused of murdering her husband Joe McIntyre, Tracy struck a deal with police officers that if she was able to help with the case and get a guilty verdict on Gail that she would be transferred to an open prison. Tracy became Gail's new cellmate and began befriending her. Despite Tracy's previous devious nature Gail came to trust her, feeling prison was making her genuine. When Tracy learned Gail had hidden a rolling pin at the lake house her and Joe stayed at (which was to stop Joe baking a cake) she told the detectives that it was a murder weapon and where to find it. The detectives found the rolling pin and believed Tracy's tale, and had her moved out of Gail's cell.

Tracy appeared at the trial to give an account of Gail's 'confession' and made up that Gail said she bashed Joe's brains in. Gail protested this. But Tracy's scheme fell under when it was pointed out her previous lies in the same courtroom during the murder trial of Charlie Stubbs. Tracy was then returned to the prison. Gail was found not guilty of the crime, and friends of Gail in prison beat Tracy up and hospitalised her for revenge for what she did to Gail. Ken and Deirdre went to see her in hospital, but ended up leaving in disgust.

Six months later it was discovered a forensics officer working on the Charlie Stubbs case was a fraud. Tracy decided to use it to her advantage and got paroled to await a retrial. She turned up on the street on Christmas Eve much to the shock of everyone and interrupted a service dedicated to the victims of the tram crash earlier that month. Gail confronted Tracy in the pub and attacked her. Tracy was marched out by Deirdre, and Tracy revealed she wasn't bothered about Gail, but wanted to break up Becky and Steve's marriage. On Christmas Day she continued her wind up and manipulations. She took Amy away from Steve and Becky after learning that they had 'bought' Becky's nephew Max Turner and used it as blackmail. She also goaded Claire Peacock who had just lost her husband Ashley in the tram crash.

Over the next week Tracy continued her behaviour and successfully alienated most of the street again. But this backfired when on New Year's Eve she was attacked by Claire and left unconscious on the back doorstep of No.1 and discovered by Steve, Ken and Deirdre. Tracy was left in a coma for a few days, and after awakening claimed Becky was the one who attacked her. Claire felt guilty and handed herself into the police and was released on bail. Becky knew Claire wouldn't cope if imprisoned, so along with some other residents helped Claire along with her sons Joshua and Freddie escape and flee to France.

Tracy had her retrial and was found not guilty. Tracy revealed her plans to leave the street and take Amy with her. Steve convinced Tracy to stay by giving her a job at the Rovers Return, which she had accepted although it gave her more of an opportunity to wind up Becky and goad her over the fact she was unable to have children. It seemed three years in prison didn't give Tracy time to come up with new material, and she just decided to recycle her feud from the Karen McDonald years.

Tracy came close to getting killed later in 2011 when Becky smashed down the Barlow's front door with a sledgehammer and threatened to kill Tracy, accusing her of reporting her to the social services over Becky buying her nephew Max Turner. Tracy stated she wasn't responsible, which Becky refused to believe. Before she could smash Tracy into a pancake, Steve came to the rescue and revealed he was the one to do it, as Tracy was using it as blackmail to keep Amy full-time. This caused Steve's marriage to Becky to end.

Steve got with Tracy and she became pregnant with twins. Steve grew attracted to Tracy again and they got engaged, although Tracy ended up losing the twins after falling down a flight of stairs after an argument with Becky. Tracy claimed Becky had deliberately pushed her, which turned some people against her despite Becky proclaiming her innocence. During Tracy and Steve's wedding ceremony in January 2012 Becky revealed the truth after gathering evidence on Tracy's lies, although she waited until they gave their vows and made their marriage official so Steve would be trapped with Tracy once the truth came out. Having got her revenge, Becky departed for Barbados with a new life.

Steve wanted to divorce Tracy, but she refused and they were stuck with each other. Steve had bought them Number 13 Coronation Street to live in as a family, although Steve couldn't stand living with Tracy. This resulted in him converting Number 13 into two flats with the help of Owen Armstrong, with Tracy living downstairs and Steve living upstairs. But this only caused them to try and wind each other up, with Tracy being in control of the heating and dropping the temperature. Steve gave up and had the house turned back into one. The pair finally divorced in 2013 after a year into their marriage, with Deirdre talking Tracy into signing the divorce papers so they could finally move on.

Tracy met Rob Donovan and they developed a close relationship and began dating.

Tracy is a vile, nasty, bitchy, cunning and manipulative person. She gets a kick out of upsetting people. She shows signs of being a sociopath. She is not far behind Pat Phelan in the evil stakes. Tracy often loves mocking other women in the street and also mocking former boyfriends. Her mother Deirdre always used to say "Oh Tracy. How could you?" to her when she heard Tracy had yet again cheated and lied on a boyfriend. Tracy was very likely born with a personality disorder, she was the daughter of roguish Ray Langton after all, and her maternal gran Blanche had an acid tongue (although Blanche didn't really become like this until her old age, she was fairly normal and friendly in her younger years). Her nasty personality was enhanced by the fact she knew her real father Ray had left her when she was a toddler, and when her mum married Ken, they both had affairs. After getting out of prison, who personality seemed to become worse, where she was openly gleeful at hurting others to the point of being cartoonish. But several years after her release, she mellowed down in her personality, although she still liked being sarcastic and outspoken.

Despite her nastiness after her regeneration into Kate Ford, Tracy still showed some better sides. Despite originally palming her daughter Amy off to her parents or Amy's father Steve, she did show love for her daughter and looked out for her. Tracy also seemed to actually love Steve, even though this became obsession and she would try and ruin his marriages to get with him. She put her obsession behind in 2013 when she met Rob Donovan, although she eventually reconciled with Steve a few years later and they married for a second time in 2018, which has surprisingly held together since then. Despite enjoying taunting Roy and Hayley Cropper, Tracy showed actual sadness when Hayley was diagnosed with cancer and later passed away.

Tracy has a close friendship with Beth Tinker and Mary Taylor, the latter whom Tracy employed at her shop which caused their unlikely friendship to develop.

Four actresses have played the character since 1977. 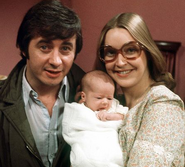 Ray and Deirdre with baby Tracy, unaware of what a nightmare she will be on the world 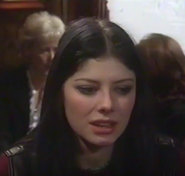 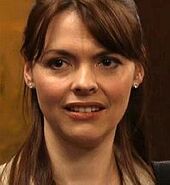 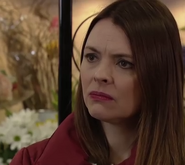